Discipleship = An Invitation to Relationship

By Alan HirschSeptember 7, 2016 No Comments 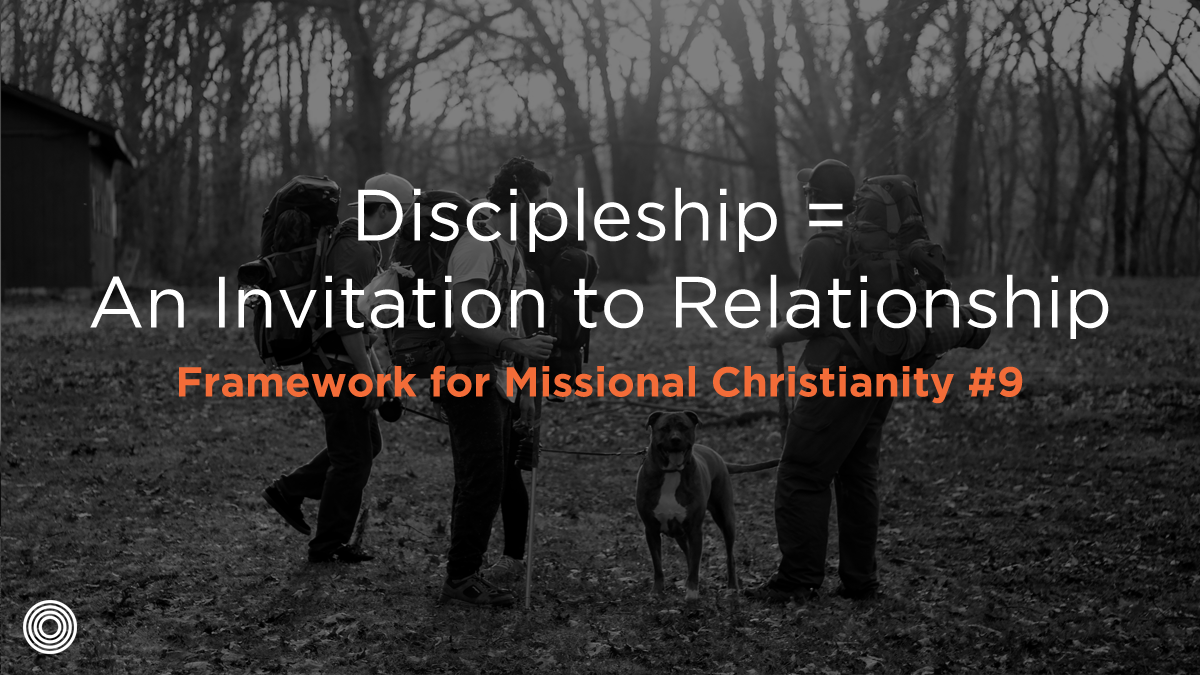 The reality is, to become a missional Christian, we begin by simply paying attention to the neighborhood and the relationships in various aspects of our life. But if the tribe you are seeking to touch with the love of Jesus lives in another part of town (or in some cases, overseas), you will need to seriously consider relocating. It is interesting that our Lord is called Jesus of Nazareth. So it’s clear that Jesus got into Nazareth, but I have often found myself wondering how much of Nazareth got into Jesus. The truth is that in the incarnation, Jesus took up residence in Nazareth, in ancient Judea, among a distinct people, and became one of them.

When seeking to touch a people, an urban tribe, it is no good simply visiting their area and then traveling over half an hour to get home. You should live where you want to serve. You should be able to bump into the tribe in the local shops and supermarket. This allows for what I call three practices of incarnational engagement: proximity, frequency, and spontaneity. 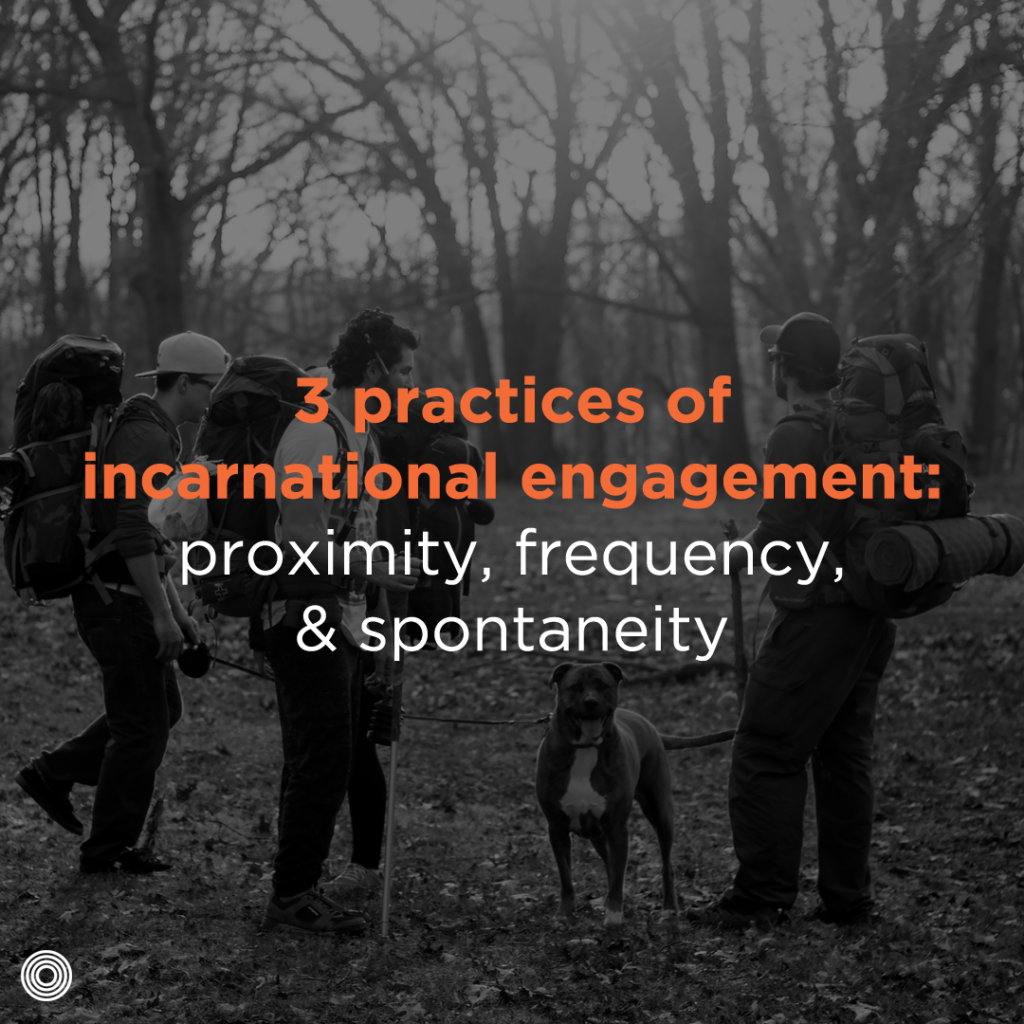 In Western settings, we should simply assume that all communication of the gospel is cross-cultural. If you do this, at least you won’t make the mistake of assuming the same worldview and beliefs as the people you are trying to reach. Train yourself to be inclusive and invitational in posture. And while the missional posture requires a go-to-them approach, it will also be an invitation to relationship. So find ways to invite people into your life: to a BBQ, to a party, or whatever. And remember to talk as if non believing people are present—learn to drop the insider/church lingo. Tim Keller says that if you speak and converse as if your whole neighborhood is present (not just scattered Christians), eventually more and more of your neighborhood will find their way into your life and community and feel a part of it.

In Untamed, Deb and I suggest that for the large part, we have generally misinterpreted the Great Commission (Matt. 28:18–20) as an evangelistic text, whereas in fact it is a discipling text. It is not about simply sharing the Good News with people through abstract concepts about Jesus and calling for a response—this is at best only part of the deal, at worst a shoddy witness and mere salesmanship. Friendships should be part of the equation. We are called to disciple the nations, which means we are committed to a long-term relationship with them that must surely include meaningful friendships, genuine involvement, and compassionate concern for a person’s best good. Christians should know how to be the best friends a person can have, because friendship (in the truest sense of discipleship) lies at the heart of the biblical commission. Think of the Great Commission in this way: as pre-conversion discipleship AND post-conversion discipleship, but it is discipleship all along the way.

In many ways this recipe is part cultural savvy, part organic friendship, and part hospitality, but in our experience Christians are not necessarily good at conversation. We tend toward functionality in our relationships, we lack cultural breadth, and we are too quick to want to get to the Bible and spirituality. In short, we should strive to be more culturally interesting. For men, sports features quite strongly in conversation, and for women, family and relational issues. Whatever the content, genuinely artful conversation uses all of these in a dialogue that is authentically conversational— subtle, spiritual, and culturally tuned to the issues of the day—to really engage people at the level of their lives and story. Remember, pop culture is where people live! Be aware of what’s going on at that level. And stop being overly “spiritual,” using insider, religious language, to talk about God—it mostly alienates people. Rather, bring a God interpretation to ordinary life without forcing conversations to the four spiritual laws. 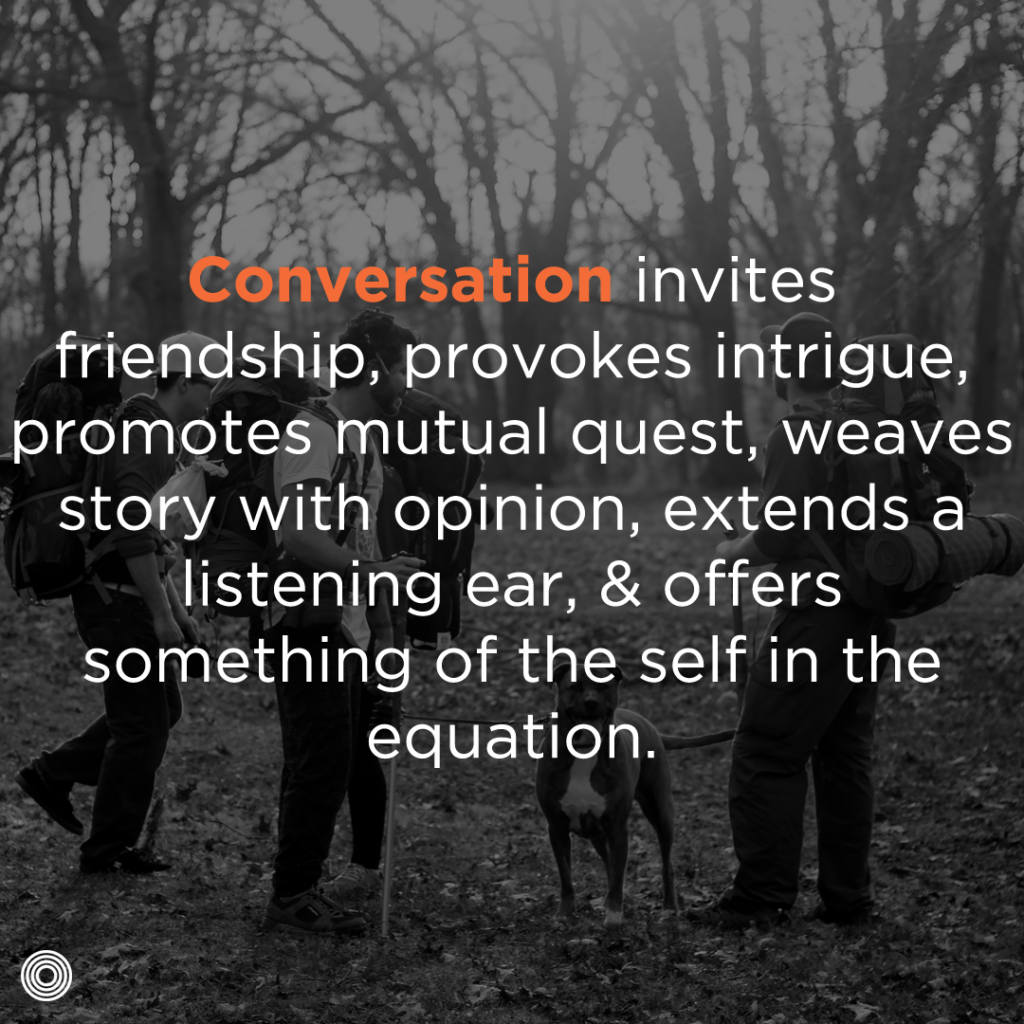 Conversation invites friendship, provokes intrigue, promotes mutual quest, weaves story with opinion, extends a listening ear, and offers something of the self in the equation. At best it is done around tables or in places of social engagement. And make no mistake; it is a powerful way of missionally engaging people. In Untamed we suggest that if every Christian family in the world simply offered good, conversational hospitality around a table once a week to neighbors, we would eat our way into the kingdom of God.

In The Forgotten Ways I suggest that all good ideas spread like viruses and that the gospel, insofar that it is an idea (of course it is more than that), is no exception. In other words, we “sneeze” the gospel into various social settings as we let it travel along relational lines.

This phenomenon of viral movements is demonstrated in the power of social networking so prevalent in our day. To be missional disciples, we need to learn how to use the power of ideas and relationships and bring these together. To do this we need rich relationships, or in terms of people movements, lots of “social surface” to be big influencers in people’s lives. The greater the social surface, the higher the likelihood of influence/spread, and therefore missional impact. It is important to remember this because the gospel always travels along and within the relational fabric of a given culture. (For more see Rodney Stark’s The Rise of Christianity, p.22).  Missional Christianity needs to get relationally savvy, and it should come naturally because we are called to love and discipleship. (For an excellent exploration into the power of networking, see Dwight Friesen, Thy Kingdom Connected: What the Church Can Learn from Facebook, the Internet, and Other Networks (Grand Rapids: Baker, 2009); or Neil Cole’s Church 3.0: Upgrades for the Future of the Church (San Francisco: Jossey-Bass, 2010).

In Luke 10 Jesus sends the seventy out with some very sage missional advice. Among other things he tells them not to start groups in their own houses but to “go” to people’s houses and start things up there. The reason? Well, it is their turf, and because of that they are most likely to invite their friends to a social gathering that they host. If it was at your place, they might come but are unlikely to invite their friends. And this is not equivalent to using people, because we choose to love them authentically in their own world; it just means being strategic with our time and influence.

The principle here is that we should be aware of social dynamics and the role of gatekeepers. It’s part of relational savvy-ness mentioned above. Missionaries have long understood that identifying the person who holds “the keys” to entry to the tribe plays a strategic role in reaching that tribe. Without being manipulative about it, we would be wise to focus on such people. If they open up to us (and God), then they in turn will win their own social circle over.

Matthew the tax collector is a case in point (Matt. 9:9–13). Mathew becomes a disciple and holds a party where he invites all his friends. Zacchaeus does the same thing (Luke 19:2–10). They don’t have to go to church or to a house church to meet Jesus. He comes to them.

Jesus was amazing at loving people authentically. His love woos us into relationship with him still. Because of Jesus, Christians should know how to be the best friends a person can have. Oh how He loves us!