Prayerful Planning for the Extrovert (and Introvert)

Faithful in all things—big and small.

By David AchataNovember 7, 2016 No Comments 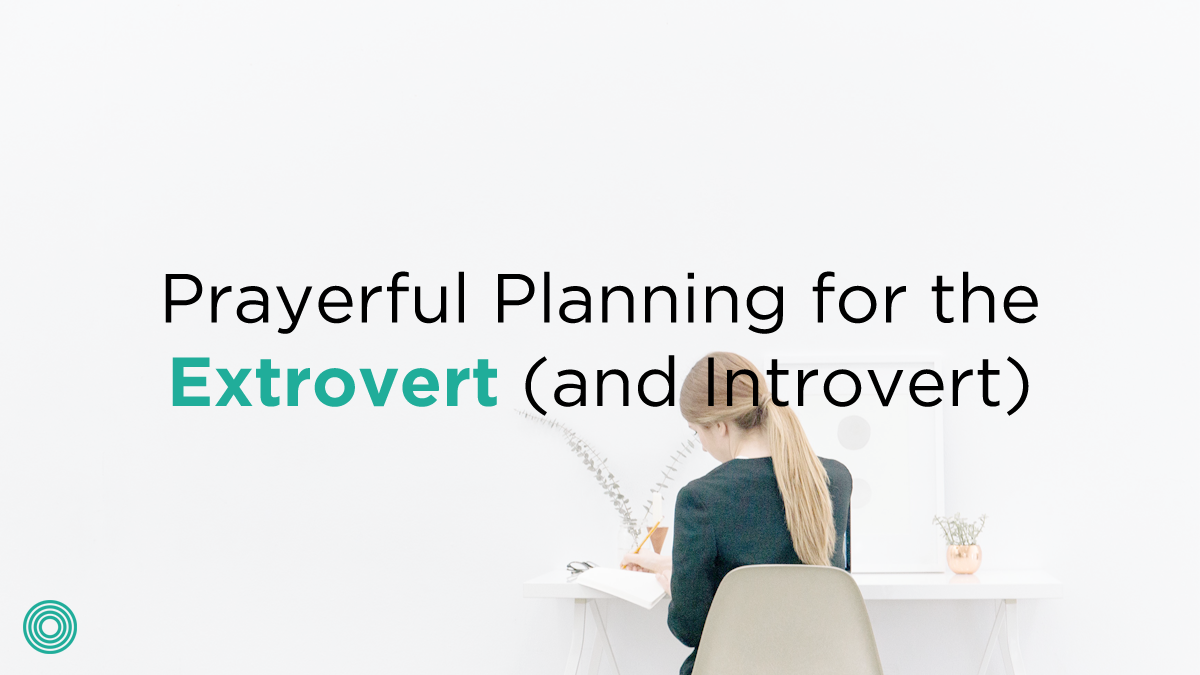 In the world of missional communities and church-planting, there’s a real misconception that to be effective you’ve got to be blowing the doors off your house every week.

I wasn’t born a planner, but out of necessity I’ve gotten better at it. I used to embrace whatever came my way. I’d take in strangers, pick up hitchhikers, and invite home anyone who was interesting. Even as an extrovert—though this energized me—there were times when living like this was exhausting.

Then I married an introvert and saw with new eyes the chaos of my schedule. Never before had I been asked, “Why do you do that?” Like an alcoholic going through detox, my wife, Amy, was patient as she watched me struggle. I was addicted to activity. Out of necessity, she had to speak up to survive.

Introverted people do love others, but their capacity is just less. Their energy is increased by having space to think and be quiet. Their relationships go deep. Extroverted people get their energy from activity and many relationships. While I stretch my wife’s capacity a little, she pulls me back. Sometimes we tire each other out. But when we’re at our best, we’re the perfect team.

Being married for fifteen years now, the conversation has changed. It used to be, “How many people should we have over?” Now we get aligned on questions like, “What season are we in?” and “To whom are we being sent?” Coming to this place of unity wasn’t easy. In fact, it was a real pain point for many years.

In the world of missional communities and church-planting, there’s a real misconception that to be effective you’ve got to be blowing the doors off your house every week. Though some of us have the gift of big-time hospitality, many others struggle to know how to be faithful in the small things. So what can be done? I’d like to suggest that most questions like this can be answered through prayerful planning.

How to Be Faithful in All Things

Jesus gave a sobering message that faithfulness in the small things inevitably leads to greater opportunities. On the other side, unfaithfulness in the small things results in losing the little you have (Matt. 13:12, 25:29, Luke 16:10). Rather than thinking about what you aren’t, imagine for a moment God made you just the way He wanted and has a plan perfectly suited to match.

Jesus spent regular time alone listening to the words of His Father. Often times this meant saying no to the crowds, while at others it meant saying yes, even when He was exhausted (Matt. 12:15). Taking up your cross to follow Jesus sometimes means saying yes to more, and sometimes it means saying no to focus on less. Following Christ looks different to different people at different times.

Recently I was talking with a Christian friend who was trying to decide between staying at her current job or leaving for something better. Our conversation went around and around. At one point I said, “Would you be OK if we just spent sixty seconds in silence listening to the Spirit?” She agreed, and a minute later she was in tears. When I asked what was going on she answered simply, “I don’t think I’m supposed to have a job for a season.” What followed was a rich conversation on how she was convicted she ought to use her time to get involved in a non-profit. I never would have thought this up for her—but prayerful silence made the difference.

This is what it looks like to plan prayerfully. It only takes a few minutes in silence each morning while asking the right questions. I’ve got three questions I go through often: “What do you want me to know? What do you want me to do? Who do you want me to tell?” Take a few moments and try it. Sometimes when we’re trying to align on who to pursue and bless, we add another question: “To whom are you sending me?” 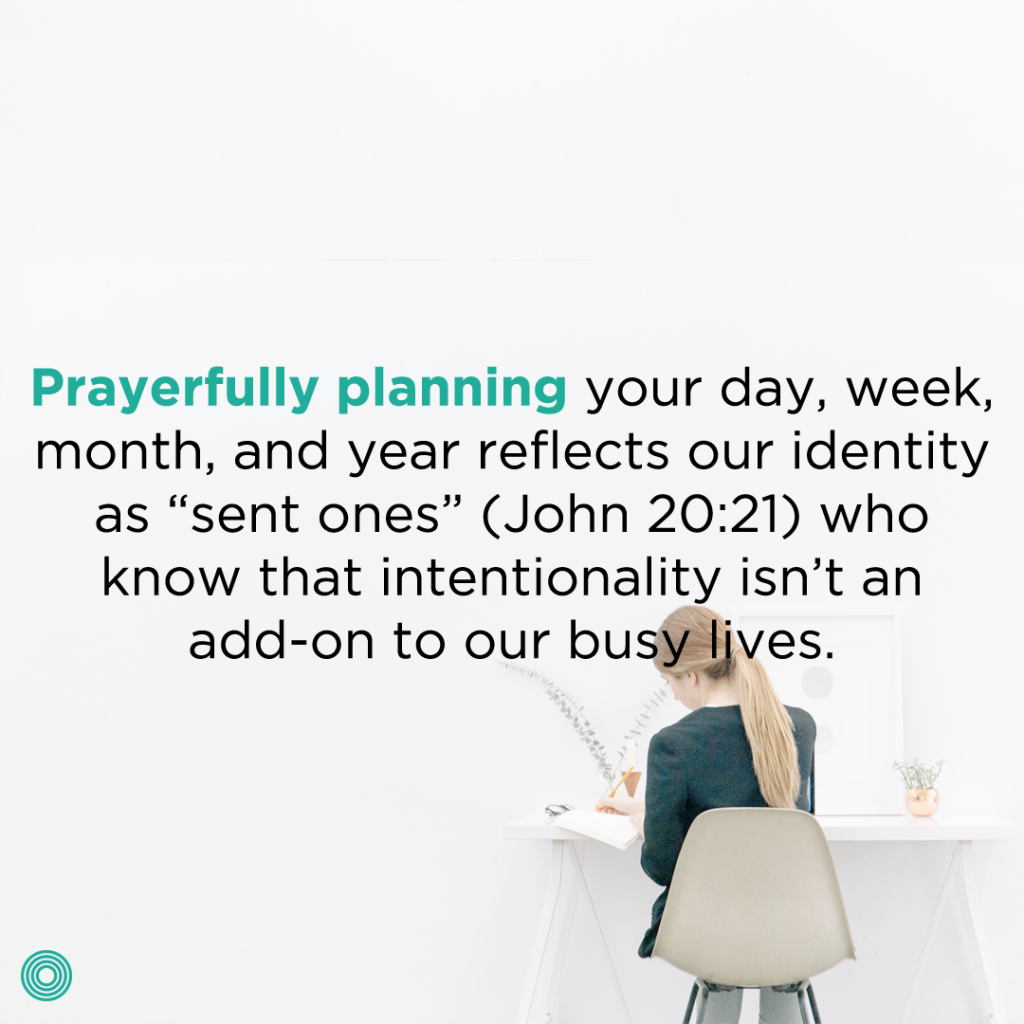 Through the years my wife and I have done this at the beginning of each week to get aligned on the specific people we are being called to pursue. A few days later when we re-visit the conversation we’re usually aligned. Then we adjust our week or month to match. Of course, surprises come up along the way. These surprises give us an opportunity to integrate the reactive mission into our proactive one. For example, we had a hurting friend show up last week unexpected right around the time we had a group coming over for a fire in the backyard. We couldn’t control this—but it turned out she met some great people, and they were able to bless her.

When we lived in the Northwest we heard some push-back to prayerful planning. “Can’t we just let things happen organically?” people would ask. My response was that my lawn is organic. If I don’t give it a minimal amount of structure to support its growth, it’s going to be a mess. The same is true with our schedules and the relationships affected along the way.

Think about your friendships. How did you make them? A minimal amount of structure supported their growth. Whether that structure was work, school, or a shared hobby, something minimal was in place to facilitate those relationships growing. The same is true with our lives, marriages, and missional communities.

Organized religion isn’t the issue—the issue is what are we organizing for? I heard Tim Keller say once that when people push back against “fundamentalism,” he would ask, “Well, what’s the fundamental?” If the fundamental is to cram unhelpful stuff down people’s throats, then I’m against it too. However if the fundamental is to organize our lives prayerfully to love and bless others through our hospitality, listening, and encouragement, then that’s worth the work.

Being extroverted or introverted isn’t the right conversation. The right conversation is how do we be faithful in the small things, big things, and all things? Prayerfully planning your day, week, month, and year reflects our identity as “sent ones” (John 20:21) who know that intentionality isn’t an add-on to our busy lives. It’s who we are and therefore affects all we touch.

Didn’t Jesus prayerfully plan the greatest mission of all to love and serve humanity? So too we are called to love others in the same way He has loved us. Try it out. For some it may mean doing more. For others it may mean doing less. But it’s the way of Jesus and the way His Spirit will empower you to go.

Do you have any tips for prayerful planning? Do share them below in the comments!