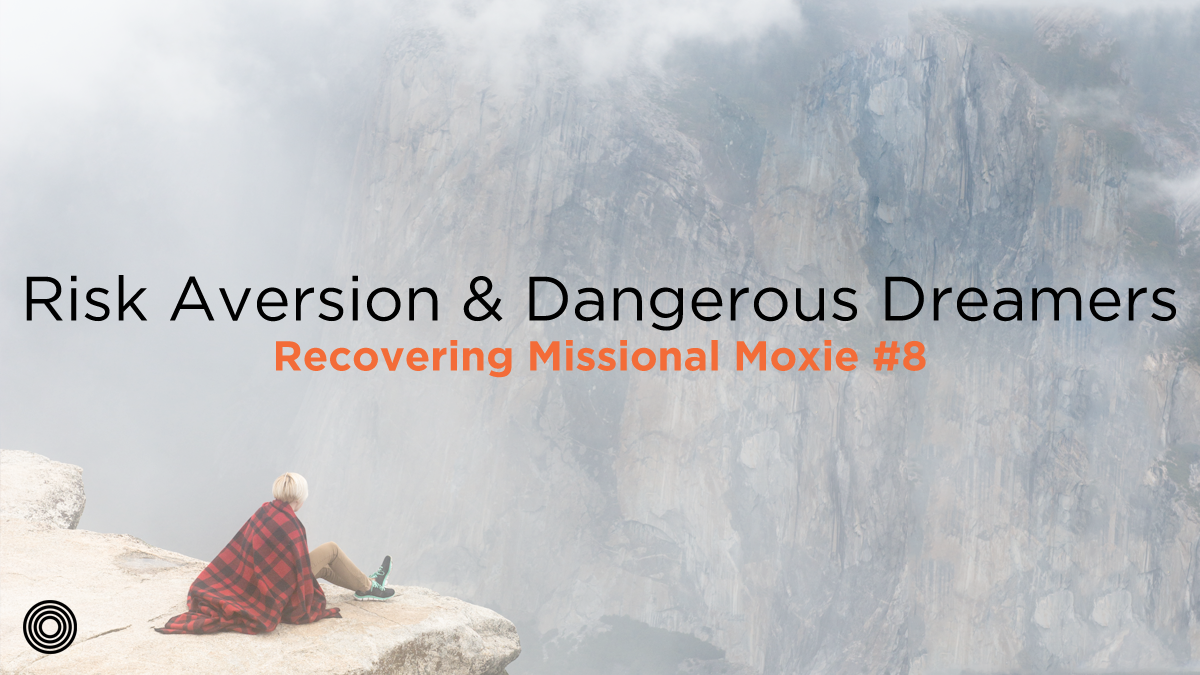 By and large the church as we know it tends to embody a culture of social restraint and risk aversion.

We do not tend to think of “church” as a place where we are likely to experience life-defying adventure . . . or any at all for that matter. Now clearly there is a role for creating a safe environment to raise children and to worship, but when our need for safety overwhelms our vision of a better world and stifles our sense of obligation to this mission, then there is a need for a serious rethink. The church Jesus built should be a place of learning and adventurous discipleship. These by definition must involve to some degree the willingness to experiment, to take risks with people, to venture out into the world in order to change it.

The truth is, mission is risky.

It involves putting ourselves out of our comfort zones and dealing with people we ordinarily might not engage with. Far from being bad for us, taking risks is actually good for the soul, necessary to a healthy learning process, and vital for innovation in all social contexts. Risk aversion, when it becomes part of the culture of church, will result in a stifling status quo that will resist anything, including God, that comes along to disturb it. We do well to consider that Jesus is always “dangerous” to our all-too-human penchant for safety and security. He is a Lord—how else could it be otherwise? 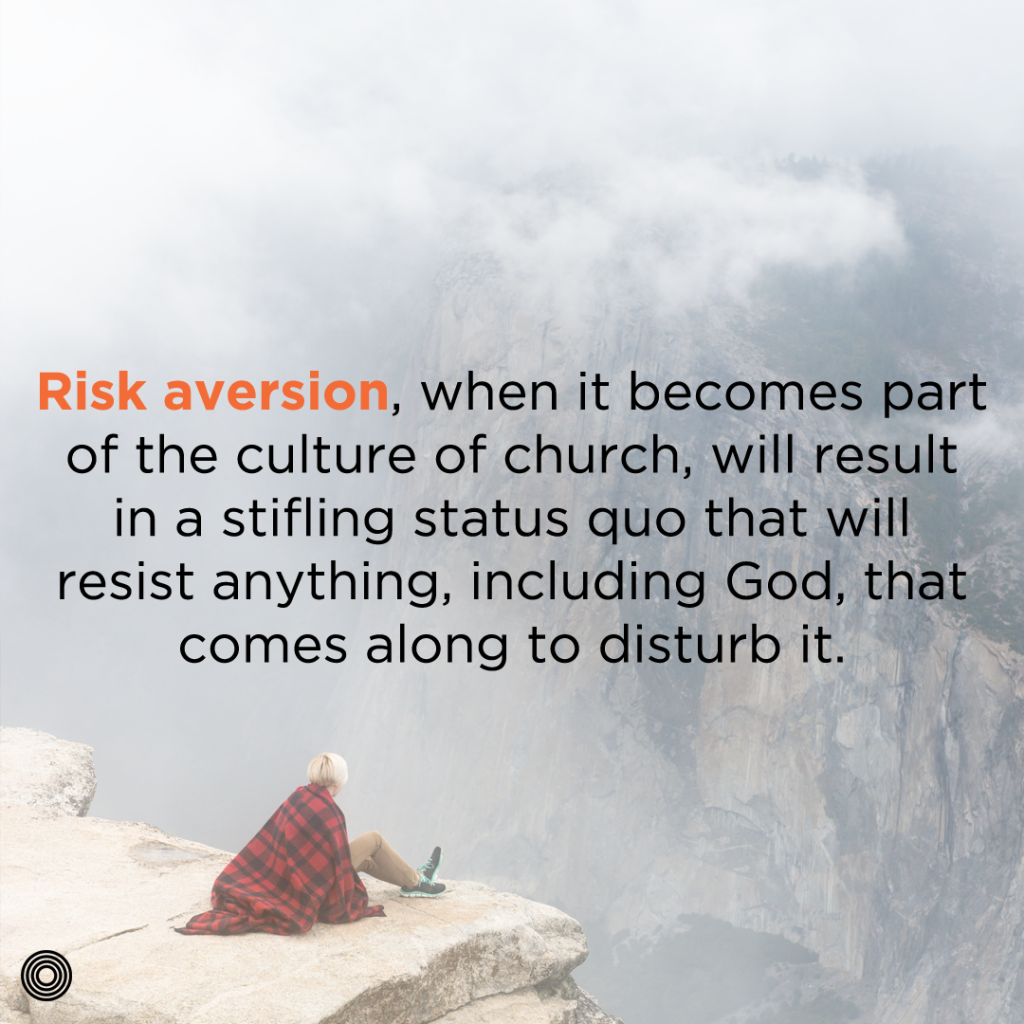 This blog series has been filled with both a sense of urgency and a sense of desperation. Urgency, because it’s hard to dodge the fact that the twenty-first century presents a major challenge to Christianity as we currently know it. Think about any science fiction movie of significance. Is there any mention at all in them of even the possibility of Christian faith? I certainly cannot recall any. Remember, science fiction as a literary genre is about human imagination exploring the possibilities of the future . . . whether they be nightmarish or utopian. The fact that the church is missing from the genre means that it plays no significant role in the imagination of what the future holds. It’s seen as irrelevant to the great issues of our day—people are not looking in our direction to lead them into the future . . . and yet who better to do that very thing?

Henri Nouwen underscored the perception of those outside the church as he told the story of serving as a chaplain of a cruise ship that was navigating a dangerous fog. “The captain, carefully listening to a radar station operator who was explaining his position between other ships, walked nervously up and down the bridge and shouted his orders to the steersman.” When he suddenly stumbled over Nouwen, he blurted out what a lot of people think about the church and its ministry: “God damn it, Father, get out of my way” (The Wounded Healer). When it came down to navigating the ship out of danger, Nouwen felt totally useless and unwanted—it seemed that chaplains are only called in to life out of a sense of an obligatory tip of the hat to religion.

The reality is we have been pushed from the places where it really matters. Even if we can project ourselves onto the end of the twenty-first century, what will we see there in terms of viable Christian faith? To be honest, I find it very hard to see the privatized, institution-based religion that we experience now surviving into any of these futures—at least as a significant social force for good. That is, unless we adapt. It’s all there in the “unless”—the possibility of repentance and change.

I believe with every inch of my soul that the church Jesus built, when it is authentic and true, is by far and away the most powerful force for the transformation of the world. The gospel will always be the good news of God that always addresses the human situation, but the church as we know it is going to have to become more aligned with it, more relevant in all spheres of life, more missional right here, right now, if it is going to deliver its Message effectively to the end of this, what will prove to be an extremely challenging, century.

The desperation I feel stems from knowing we have a great opportunity right here, right now to recalibrate ourselves for what is coming. In fact, I believe that this recalibration, this rebooting, is well under way. We can, and I believe will, become a people movement again, but only if we can awaken both sides of the movement equation. We need the apostolic mission to engage in exponential church planting, creating communities of faith wherever and whenever we can—many of them, and much more diverse than what we now experience. But the other side is also vitally important. We need to awaken the sheer missional moxie of God’s people as a whole. We all need to recognize and live out the reality that we are all commissioned (dare I say, ordained) agents of the King, and we live out that agency in every sphere and domain of society. Everyone gets to play! If we fail to awaken the sleeping giant of the body of Christ, then I believe our opportunity will be lost and the church will continue to decline, eventually becoming a mere cultural footnote to Western history.

Much depends on our choices and actions now. I dream that some brothers and sisters, standing at the dawn of the next century, will look back to our time and say that the course of history was changed because many of us broke from the herd and under God rediscovered our courage, along with the missional potentials that lie dormant in God’s people.

All men dream, but not equally. Those who dream by night in the dusty recesses of their minds wake in the day to find that it was vanity: but the dreamers of the day are dangerous men, for they may act their dreams with open eyes, to make it possible.

Ready to live out a risky mission?