Before, During, and After

By Derek HiebertJanuary 18, 2017 No Comments 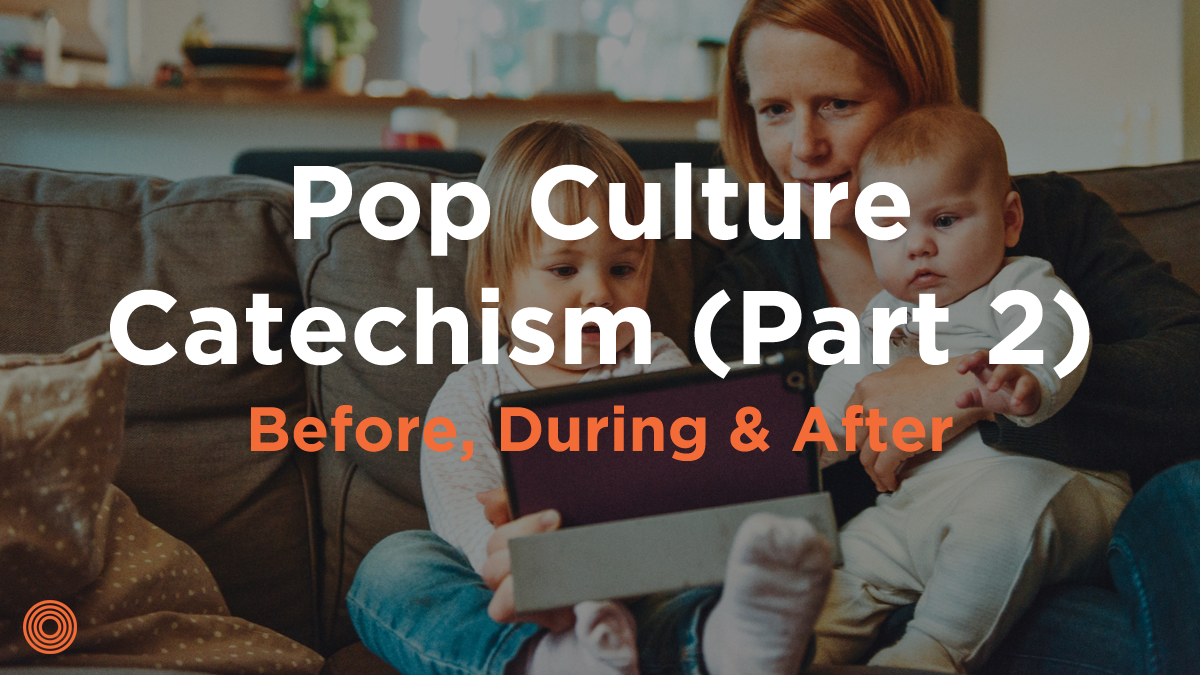 Warning—if you haven’t seen or if you plan on seeing Moana, there are spoiler alerts aplenty in this post!

In part one of this series, I explained the why and how-to process of using the stories in movies to teach kids the story of the Bible. (Pro tip: This teaching method can also be used with adults.) In this second part, I would like to demonstrate an example of this from the recent Disney movie Moana.

Step 1: Before the Movie

Keep in mind the biblical storyline: Creation (beginning), Fall (problem/conflict), Redemption (solution), and New Creation (“happily ever after”). Refer to part one for more detail on each of these points in the storyline.

Step 2: During the Movie

Analyze the storyline of the movie using the same plot movement of the Bible. Here is what this looks like in the story of Moana:

Creation: The history of how the islands were created. With only water in the beginning, the islands are formed out of a life principle (glowing stone) through a creator goddess. The biblical parallel here is fascinating with the formlessness of water and land being created out of water (Genesis 1:2).

Fall: Death and decay are brought into the world through the glowing stone being stolen from its original setting and lost by the prideful misdeeds of the demigod Maui. Here again we have another parallel to the biblical story with the original sin of Satan and humanity: pride and distrust of God’s authority and provision, wanting to be gods themselves.

Redemption: Moana, the young female chosen by an impersonal spiritual power in the ocean, with the reluctant help of Maui go on a journey to find the lost stone and return it to its rightful place. Both characters act as the heroes of this story, bringing redemption and new life to the islands, reversing the death and decay.

New Creation: Everyone on Moana’s island enjoys a “happily ever after”—a renewed identity that was once lost as a people of exploration and adventure. Maui gets his power back as a demigod and seeks to practice his power with a new humble attitude and purpose. Like all good hero stories, Moana enjoys the fruit of her own redemptive character development. 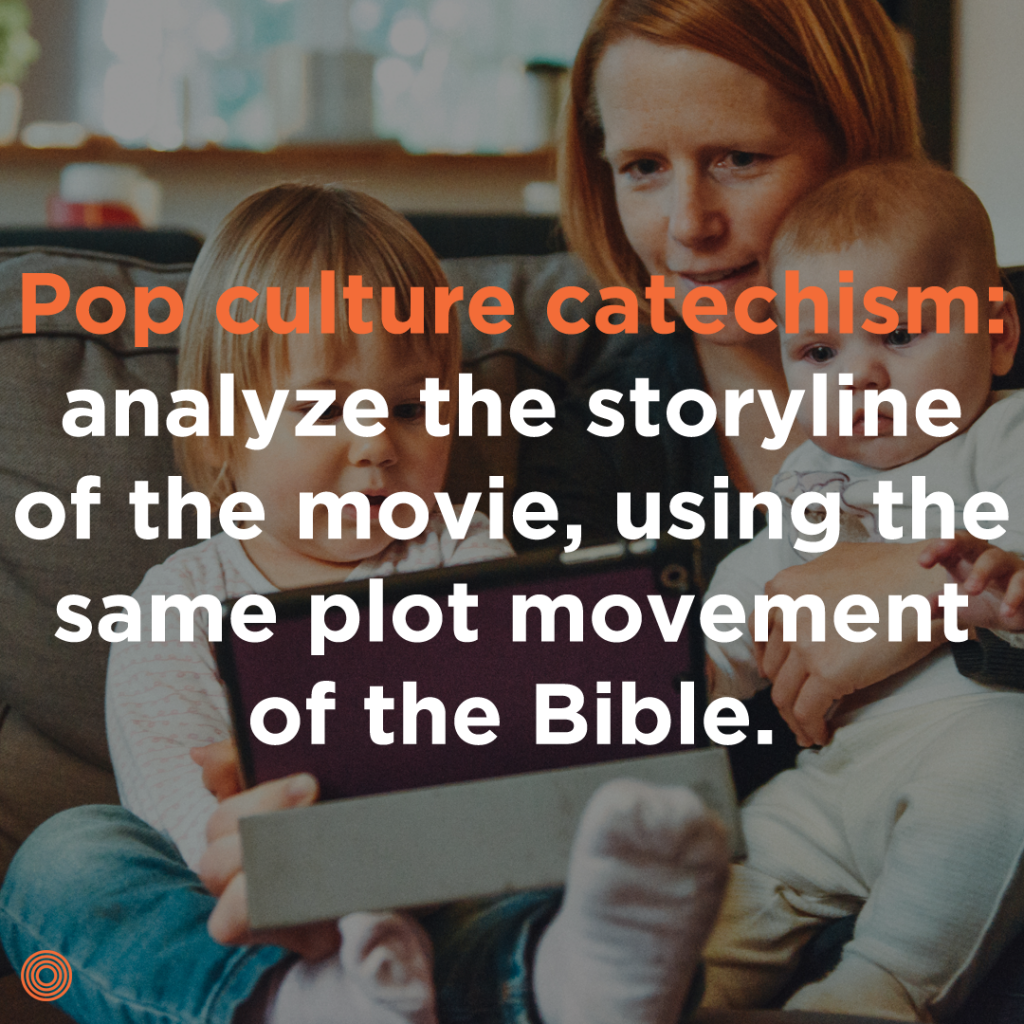 Step 3: After the Movie

Creation: As with Moana, the biblical story begins with God creating a world that is filled with water. He then creates land, animals, and finally people to populate the land (Genesis 1:2). The contrast with the two stories, however, is that the creator goddess in Moana has no relationship with and no personal interest in the people who are created. In fact, when the precious life principle stone is lost by the demigod Maui, she takes on a wrathful fiery presence, literally, turning extremely angry and completely unapproachable (a similar picture to the Greek mythologies of gods who were moody and unpredictable).

Fall/problem: The decay that spreads like a curse to the islands in Moana is similar to the decay and brokenness in the biblical story that covers the earth because of humanity’s sin. However, the major difference here is that the death-curse of the Bible is a result of human rebellion against God, not because a precious stone is somehow lost.

Redemption: Moana and Maui achieve redemption through personal courage and ingenuity and, of course, the magical power of the impersonal force in the ocean. They experience some danger here and there, but both come out of it fairly unharmed. The comparison to the biblical story is that the hero, Jesus, accomplishes redemption by His own courage, wisdom, and strength, as the perfect God-man. However, the blatant contrast in the two stories is that Jesus completely humbles Himself, laying down His life for the sake of His enemies, dying an utterly painful death. Of course, He does resurrect and attain glory from His Father as part of our redemption, but this does not come without an arduous journey through suffering, abandonment, and death. This contrast within the redemption theme is the most significant between Moana and the Bible because of the counter-cultural way in which Jesus brings about redemption.

New Creation: The similarity to the biblical story here is that Moana’s village is wiped clean of the decay that was threatening to take over their whole island. As a result, they enjoy a renewed existence. As well, they find a restored identity as adventurers who go on missions to seek out new islands, similar to the biblical story of humanity finding new identity and missional purpose in Christ. In short, peace, joy, and new values are at the center of their “new creation” reality. In the biblical story, however, God is at the center of the new creation reality, for it is only because of Him and through Him that a restored reality can be fully realized; and it is only from Him that all peace, joy, and new values emanate, as the final chapters of the Book of Revelation so vividly depict.

What other movies would be great examples to teach kids about the story of the Bible? Let us know in the comments below!

Derek Hiebert serves as the Director for Western Seminary’s Seattle Teaching Site, which is partnered with Doxa Church and Soma Sending, as well as with Soma Tacoma church. He and his family live in Parkland, WA.