What NOT to Do When Raising Support 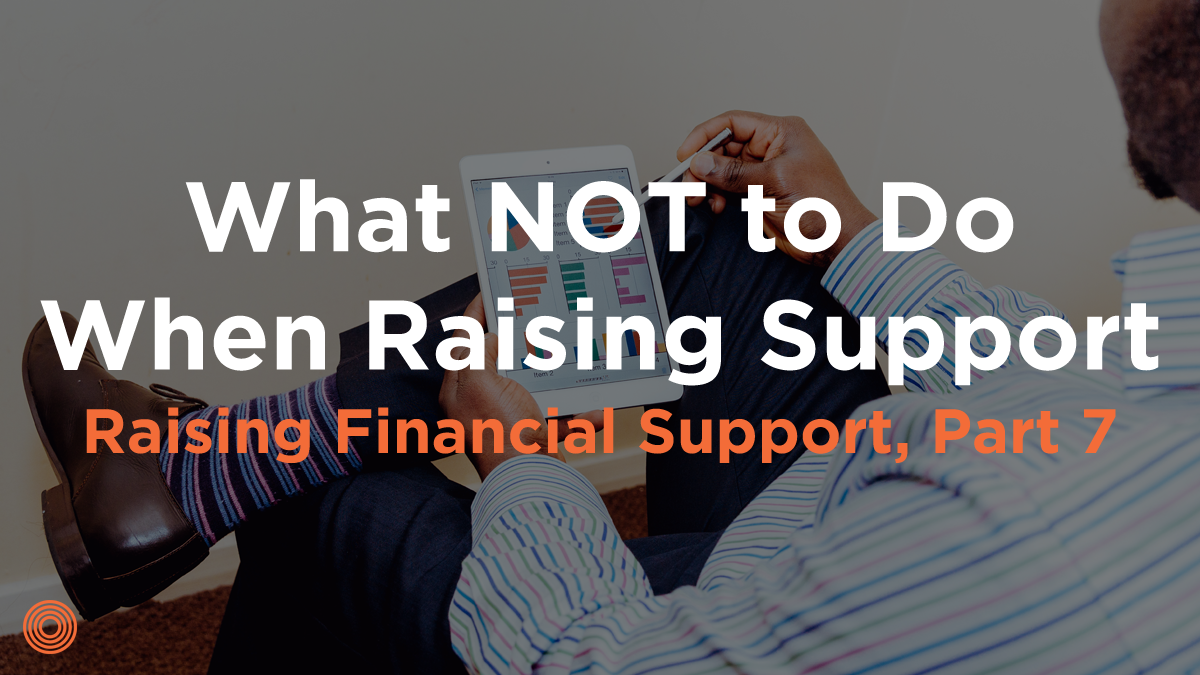 Don’t stop chasing the dream God put in your heart.

In this seventh and final edition of this series, I’m going to leave you with a list some of the biggest “Don’t Do’s” in the support-raising world. The first don’t of this article is don’t stop chasing the dream God put in your heart. Raising support is challenging! It comes with many unique situations and people, and at times you may want to quit. You can never get enough coaching, feedback, and encouragement, so please keep us in mind if we can assist you on your journey. We would love to help in your specific situation, and I hope at the very least these blog articles have encouraged you to keep your eyes fixed on Jesus and on working toward full funding.

Here are five fundraising DON’TS to cap off our time together:

This quote from The God Ask by Steve Shadrach essentially sums up this point: “. . . make note of this sobering survey Scott Morton took of one hundred Navigator staffers who made 7,800 financial appeals. Here are the four different methods they utilized:

“My experience and that of many we have trained is that about half of the people you meet with in person will join your team. There is a very important caveat this study doesn’t necessarily reveal. The 9%, 14%, and 27% listed above are normally very weak and shallow commitments, whereas the 46% who came on board in face-to-face appointment are much stronger and deeper. Here’s the missing factor: How you go about securing your new donor will say everything about:

“If we choose a less personal route, they may come on our team, but many times it will end up being a superficial, short-term commitment, for a smaller amount, on an inconsistent basis. If you commit to the more loving and customized approach, similar to ‘the marriage proposal,’ that person will always remember the respect, sensitivity, courage, and care you showed.”

I couldn’t affirm those findings more. It’s tempting to take indirect approaches, such as social media posts, etc., but I can assure you this will bear indirect fruit.

2. Don’t send a letter with a self-addressed envelope in it.

As noted in the above statistics, 14% give in response to a letter, but 27% will end up giving IF the letter is followed up with a call. Many times “missionaries” send out emails or letters, but there is simply a call to action that is unclear—if at all. Don’t get me wrong; I’m all for a letter, but please in that letter explain exactly how much you need to raise and by when. Also in that letter ensure you have a note that explains you will be following up by phone call to see if they got the letter and if they’d like to help in any way. If you read The God Ask you’ll see more reasons on why, but just blasting emails or letters and crossing your fingers is ineffective and impersonal. Letters with follow-up by phone are a great way to catch up with people and get together face-to-face to share what God is doing in your life.

3. Don’t do the thinking for your prospective donor.

Simply put, the only thing you should be thinking going in to a donor meeting is how can you be a blessing to that person by sharing 1) what God has been putting on your heart, 2) what God has been doing in your ministry, and 3) how they can get involved in His kingdom work. Whether they give or not is TOTALLY between them and God, so don’t waste your time by thinking of all the reasons they can’t, won’t, or might not give. Seriously, how do you even know? I’ve had the most unsuspecting donors give a ton and the ones who could easily afford to support me say they can’t. Don’t do the thinking for them; share, ask, and let them decide for themselves prayerfully. 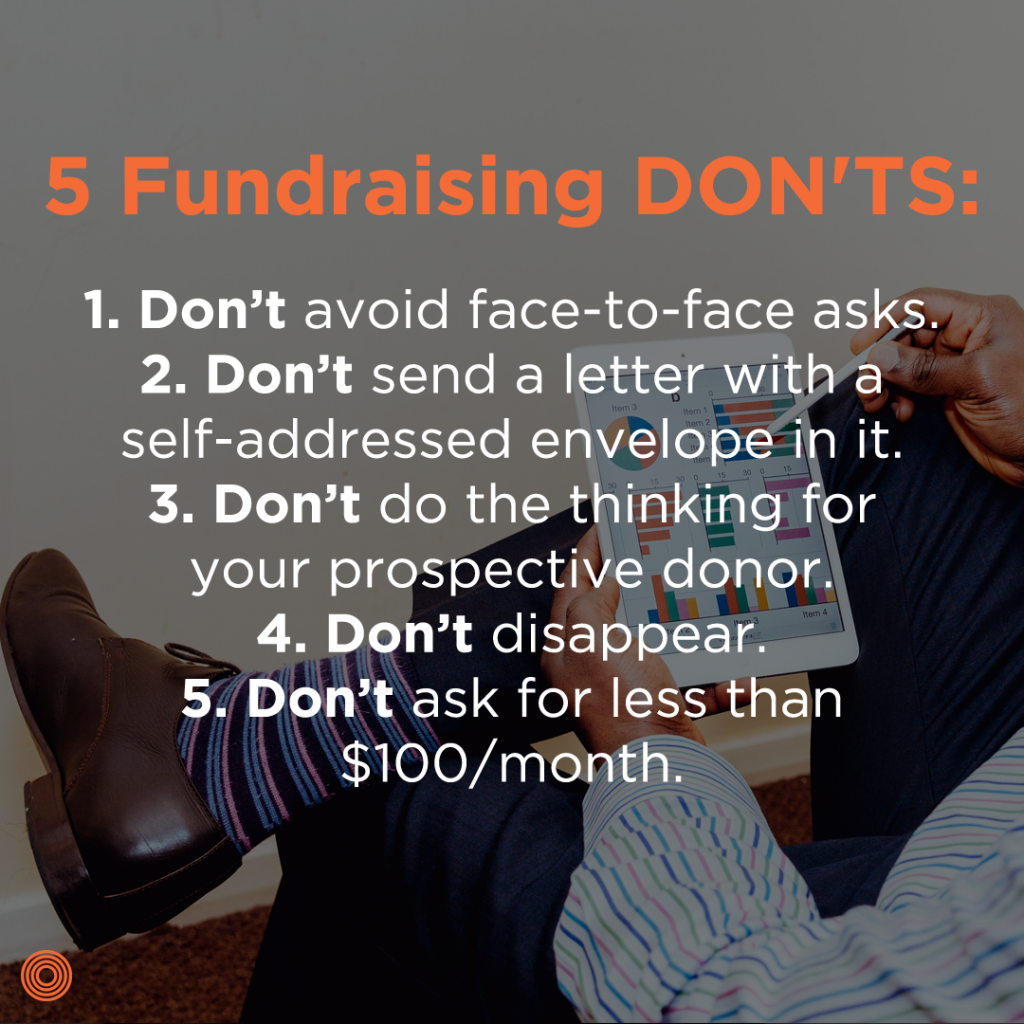 This should be a no-brainer, but sadly it isn’t. I’ve supported many people, and 80% never say thanks directly. If someone becomes a supporter, make it a priority to send them a handwritten thank-you card within a week or so and send updates at least quarterly in some way. When we don’t do this it just gives off the impression we don’t care, and nothing could be further from the truth, hopefully.

Finally, don’t ask someone at a face-to-face appointment to support you for anything less than $100/month or that equivalent. Before you push back, see #3. How do you know they can’t? Unless you plan to spend the next three years asking people for support, I’d suggest asking for nothing less than this. If they can’t do it they’ll tell you, but at least you’ve honored them by assuming they can. Who wants to be told, “Um, I’d love for you to support me, but you probably can’t afford very much so maybe like $20 a month”? Sounds ridiculous but sometimes we’re actually thinking that! Keep in mind for many working couples $100 per month is well within their expendable income.

I’ve probably ruffled some feathers or picked on something you’ve done, but keep in mind Proverbs 27:6: “Faithful are the wounds of a friend, but deceitful are the kisses of an enemy.” May your funding journey reap a harvest of deep friendships.

Which of these Don’t Do’s do you plan on implementing next?

Tim serves as an Elder/Pastor with Surfside Church (formerly Groundswell Communities) where he and his wife Allison lead a Missional Community in Encinitas, California. Tim also serves as the San Diego Coastal Area Director with Fellowship of Christian Athletes (FCA) where he works with students, athletes, & coaches. Additionally, Tim coaches defensive line at a local high school and serves as the football program Chaplain.