I Am A Recovering Hypocrite - Saturate
DiscipleshipIdentityLeadershipSpiritual Growth

I Am A Recovering Hypocrite

You can be too. 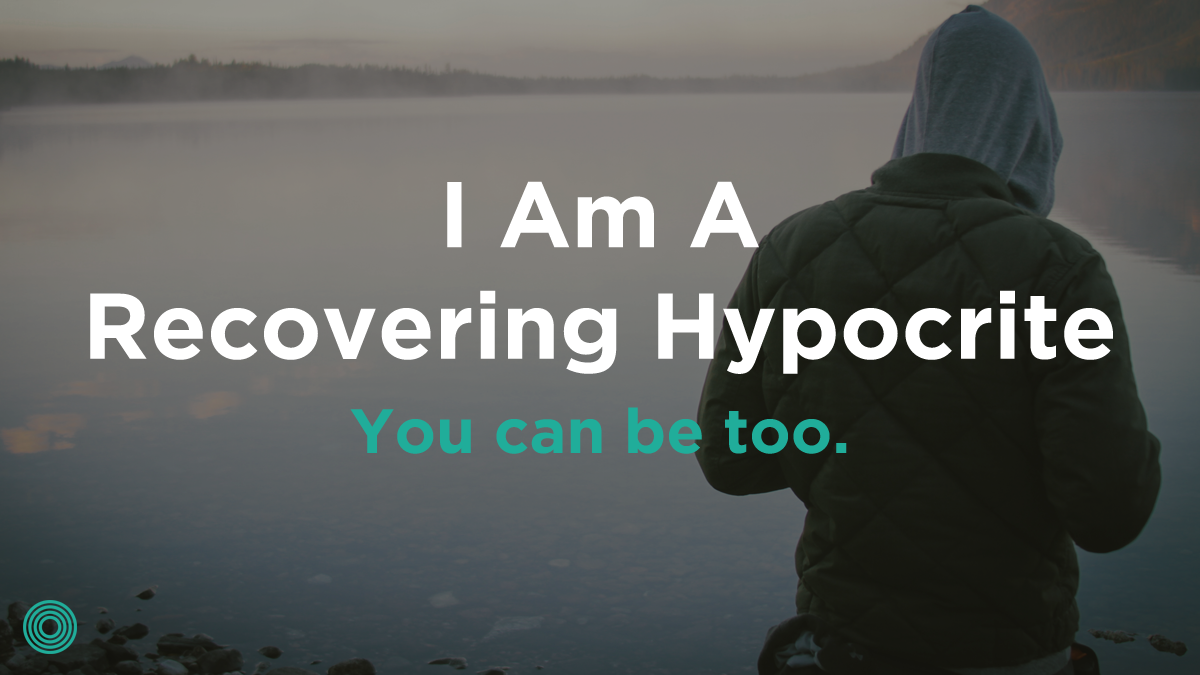 Strike up a conversation with someone who has been through Alcoholics Anonymous, and you will notice something unusual in the way they talk about themselves. You will never hear the words, “I am a former alcoholic.” Rather, you will hear the sober declaration, “I am a recovering alcoholic.”

These battle-weary veterans know it doesn’t matter if their last drink was five hours ago or five decades ago; the possibility of falling off the wagon looms as close as the nearest bar or difficult relative.

They are never completely former.

I am a “recovering hypocrite.”

Now you may want to just stop reading at this point, and I wouldn’t blame you. Hypocrisy, especially in Christian circles, is one of the big ones. Lots of people won’t go to church because it’s filled with people like me. With a smug confidence in the solidarity of their own life, they will declare, “How could someone possibly say they believe one thing and live like they believe another?”

I’ll tell you how.

They like sin. A hypocrite knows there is a disconnect between how they should live and how they actually live, but they like sinning. The problem is they also like other people thinking they don’t sin.

You see, a hypocrite is simply someone who wants others to see them as holier than they are. To achieve this goal, they hide what’s really going on in their life.

I guess I shouldn’t say “they.” I really should say “I.” Deep down in the fleshy parts of my soul, I want to sin and have you think I don’t. It’s been that way for as long as I can remember.

I grew up in a Christian home led by godly parents. I was raised in the church. I have read the Bible cover to cover (many times). Not only that, I am a pastor, which means people expect me to show them God’s standard for living. Unfortunately, I know I don’t measure up. Worse, a lot of times I don’t want to measure up. I enjoy sinning.

There, I said it. 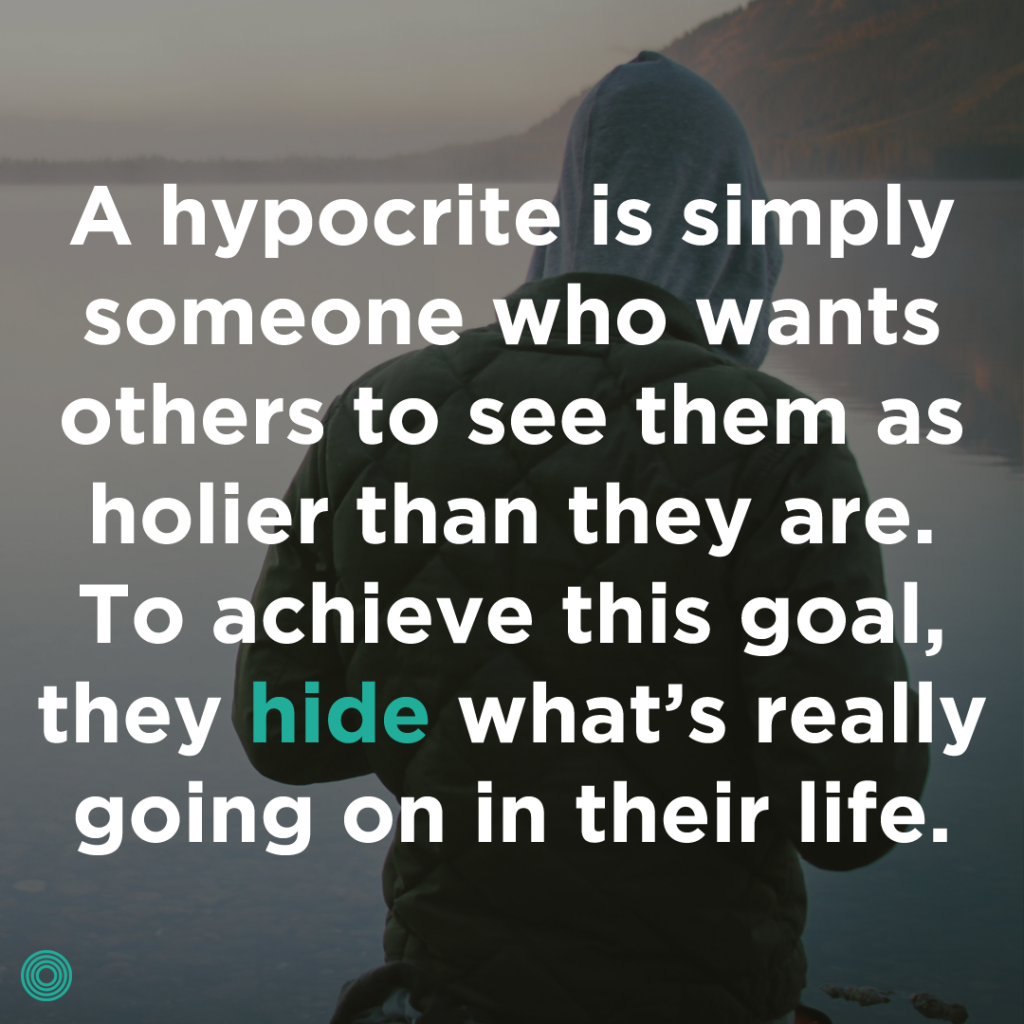 Some of my historic patterns of sin are little (you wouldn’t even think they were big deals) and some are doozies. So what’s a recovering hypocrite like me to do?

A number of years ago, I began to let my guard down slowly. It started with letting my hypocrisy be known to those closest to me (my wife and my closest friends). Then, as I gained confidence, it moved to a wider group of people (my small group and my co-pastors).

Finally, I began to preach about my sin at church.

And the weirdest thing happened.

It was (and is) scary to put yourself out there like that, but let me tell you from personal experience—it’s so worth it.

You see, when I was always in hiding it, I was embarrassed. I didn’t want anyone to know about my sin and that included God. On those rare occasions when I would pray, I wouldn’t talk with Him about my real struggles. Sure, I would confess the socially acceptable sins, but the dark stuff—the sinister stuff? I kept that to myself.

But here’s the truth: God knows. He really knows.

Remember the Samaritan woman in the Bible? She tried to dodge a difficult conversation with Jesus by starting a fight with Him about religion. When He asked her to include her husband in the discussion, she deftly declared she didn’t have one (which was technically true), but Jesus didn’t let her hide. He flat-out declared, “You are right in saying, ‘I have no husband’; for you have had five husbands, and the one you now have is not your husband. What you have said is true” (John 4:17–18).

But that’s not the only truth in this verse. Those who belong to Jesus know Him. We know His perfection, His sacrificial death on the cross, the power of His resurrection, His ascension to the right hand of the Father. Only in light of these profound truths can we begin to grasp the reality of those who are in Christ:

“For by a single offering he has perfected for all time those who are being sanctified.” (Hebrews 10:14)

You are perfect, and you are being made perfect at the same time. Both are equally true, but only one has a timestamp. Because of Jesus’s work on the cross you are perfect for all time!

What would happen if we lived smack dab in the middle of that truth? We would live each and every day in awe of the eternal perfection Jesus has given us in God’s eyes. However we wouldn’t stop there. Because we are both perfect and being made perfect, we wouldn’t be surprised at our failure to live up to God’s holy standard on this side of eternity.

The more we hold onto this tension, the more comfortable we will feel coming out of hiding.

Maybe that’s why the Apostle Paul could proclaim toward the end of his life, “Christ Jesus came into the world to save sinners—of whom I am the worst” (1 Timothy 1:15 NIV). Paul is standing tall and shouting to the world, “I AM A RECOVERING HYPOCRITE!”

This didn’t cause Paul to despair or worry about his salvation because “if we are faithless, he remains faithful—for he cannot deny himself” (2 Timothy 2:13). Jesus cannot deny Himself, which means He could not deny Paul and He will not deny you because you have been made one with Him.

So when there is a disconnect between the holiness you know God calls you to and how you are living your life, you can declare along with me and the Apostle Paul, “I am a recovering hypocrite.”

It will be hard. You will have to face some difficult earthly consequence along the way, but something remarkable will happen along the way.

You will feel free. 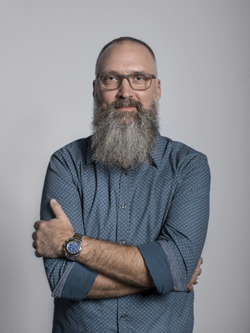 Noel is one of the pastors at Riverview Church, a rapidly-growing, multi-site church in the Lansing, Michigan area. In addition to his work at Riverview, Noel serves as the U.S. Midwest Network Director for Acts 29 and as Chairman for Reliant Mission, an organization that mobilizes missionaries to work with local, missional churches globally. His first book, Unchained: If Jesus Has Set Us Free, Why Don’t We Feel Free? – was released in February. When not working, he can be found hanging out with his wife Grace, his daughter Emma, or on a baseball diamond somewhere with his three sons Jesse, Ethan, and Cole.

Are you ready to admit you’re also a recovering hypocrite?

Amy serves as the Managing Director of Saturate. She oversees development and implementation of Saturate’s key initiatives, operations, events, and staff. Amy’s spirit of entrepreneurship has led to successful businesses in retail, catering and book publicity. She and her family live in Seattle. Connect with Amy on Instagram, @SprightlyAmyAnne.