By Todd EngstromFebruary 8, 2018 No Comments 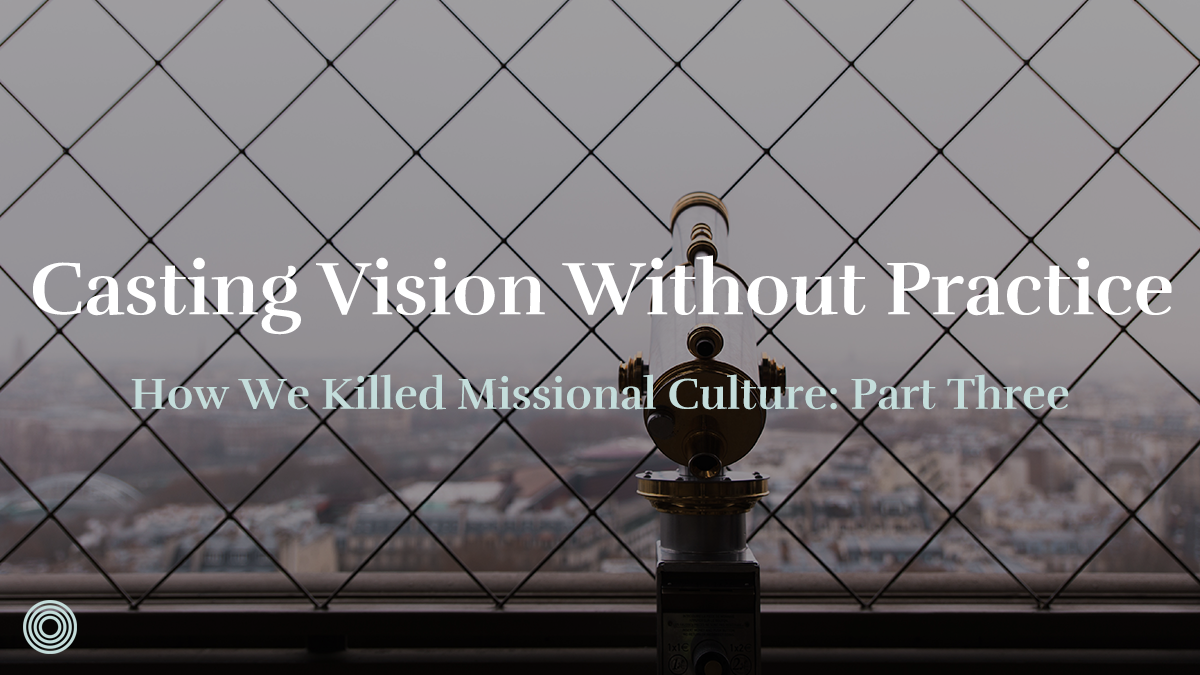 The first way we killed missional culture was assuming the gospel.  Keeping the gospel central also helped the 60% who were frustrated, but we learned another lesson with that group of people.

The second way we killed missional culture was casting vision without practices.  We told people where we wanted them to go, but not what they should actually do.

Our Story of Gospel-Centered

After casting a vision for mission, we kind of swung the pendulum to casting vision for the gospel.  But we were still primarily only casting vision. We became a broken record for gospel-centrality.  When anyone asked the question “what should I do?”, basically the answer was “repent, believe the gospel and go on mission”.

So if someone came up and asked:

We became annoyingly gospel-centered.  To some extent, that’s a good thing.

But a vision of the gospel mission without practices is exasperating for people who want to be on mission.

People are told to believe the gospel, and they have a desire to be obedient to Jesus, but are left without any way to actually do it.  Or even worse, they’re killing it on mission but still feel like a failure. We had told our people true things, but had forgotten to teach them helpful things as well. 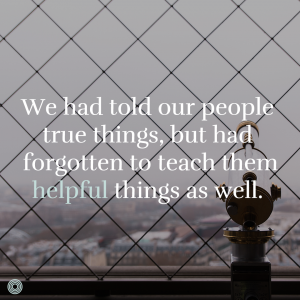 I recently had a coaching conversation with a friend who leads a missional community in my neighborhood.  We sat down for an ice-cold beverage at a local establishment, and I asked him how things were going.

After taking a long drink, he looked at me and said “I feel like a failure as a leader.”  When I asked him why, he responded “I can’t get people on mission.”

I started to ask him about some of the people in his community, and their stories.  It turns out there was:

How in the world did this guy think he was failing?

I think it’s because he heard vision and the gospel, but didn’t have anyone affirming the basic practices of Christian discipleship.  He had heard us talk about reaching our city, but hadn’t had anyone regularly teach and celebrate simple acts of obedience.

Our city is going to be reached one neighbor, one conversation, one kind act of love at a time.

You see, we failed to equip him to act the vision in his suburban context – in the mundane of every day.

This is the work of equipping the saints for the work of ministry.  The gospel certainly is the foundation of equipping, but it doesn’t make practical stuff unnecessary.  We had failed to help our people act themselves into a new way of thinking. 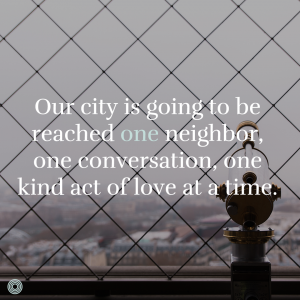 Ephesians again is a gentle reminder for us as we pursue missional communities.

And he gave the apostles, the prophets, the evangelists, the shepherds and teachers,  to equip the saints for the work of ministry, for building up the body of Christ, until we all attain to the unity of the faith and of the knowledge of the Son of God, to mature manhood, to the measure of the stature of the fullness of Christ.

We have rightly focused in the missional conversation on the 5-fold ministry. I want to draw your attention to verse 13. Let’s think about maturity for a moment.

The image Paul is using here is one of a maturing body – bodies function properly because the different faculties are being disciplined over time.

For a church to be mature, we need to equip the saints in the gospel, yes, but also in simple practices.  You can have a vision of being a church that makes Christ known, but without consistent, thoughtful training and discipline, all you have is an unrealized desire.

That’s because vision without practices is just a good idea.

I want to implore you to cultivate a simple set of transferable and reproducible practices that you equip people to do repeatedly over time.

Alan Hirsch says it this way – “you need to act yourself into a new way of thinking”.  There are a lot of tools out there which are helpful.  They won’t magically make you missional, but you need tools to help people put vision into practice.

Don’t kill a missional culture by casting vision without practices.

For us at The Austin Stone, the simple community practices of Life Transformation Groups, Family Meals, and Third Places helped the 60% of people with a desire to change actually take steps of obedience.

Sticking to these practices over time, and applying them in a variety of different contexts has helped that 60% act on their desire to live differently.

What mistakes have you made in putting vision into practice?