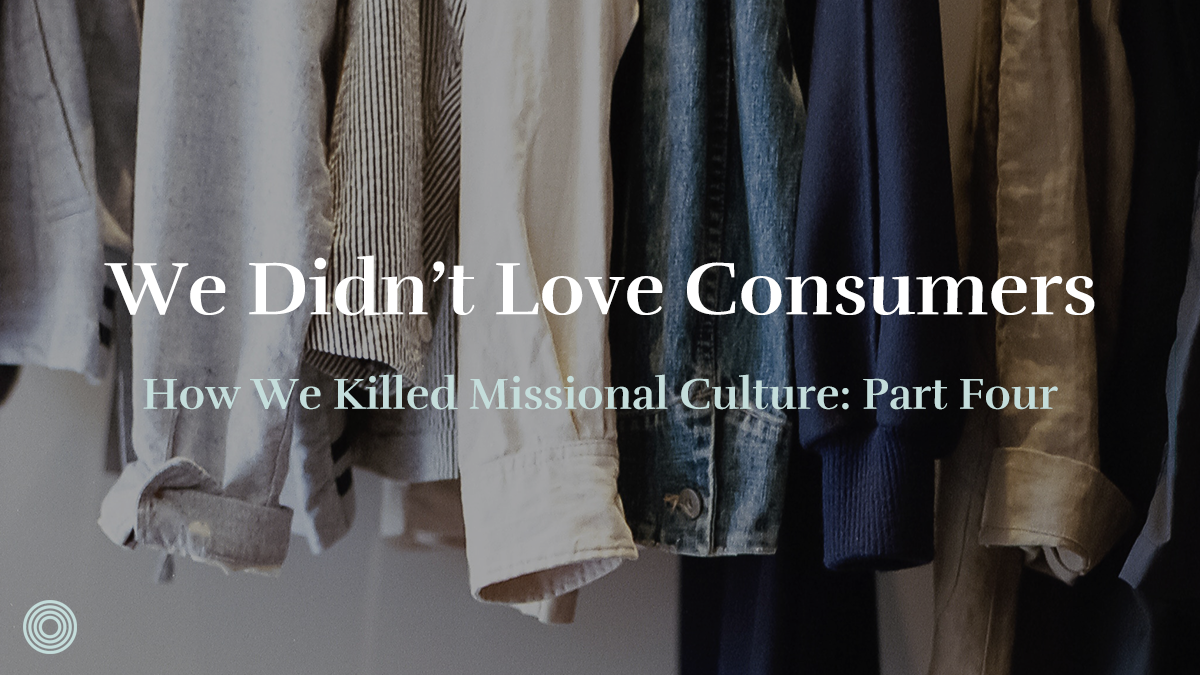 So to this point, we’d committed two cardinal sins – we assumed the gospel, we cast vision without practices.

But what about the final group of people we had, that 30% who stuck their heads in the sand when we cast vision for missional communities?

We learned our third lesson – we didn’t love consumers.

To be honest, it’s discouraging when people don’t want to be obedient to Jesus.  I think I spent a lot of time agonizing over that 30% – what do we do with them, how do we convince them, should we kill those kinds of groups?  You can only hear a request for another bible study or another “fellowship group” so many times before you want to jump off a bridge.

Ephesians is such a helpful book because Paul is centered on the gospel at the beginning, gets quite practical through the middle, then circles back around at the end to something very important. In Ephesians 6:12, Paul says this: For we do not wrestle against flesh and blood, but against the rulers, against the authorities, against the cosmic powers over this present darkness, against the spiritual forces of evil in the heavenly places.

Our enemy isn’t flesh and blood. It is the powers and principalities of Satan.  The enemy has entrapped our church and our culture with the insidious evil of consumerism.  We have bought the lie that we are what we can get.

But I made a mistake – I thought my enemy was consumers, not consumerism.  I started to fight consumers, who are people created in the image of God, rather than the evil of consumerism.

Here’s a quick story about how we failed in this area.

Early on in the transition, we also wanted to create a sort of Navy SEALS program to find some high capacity MC leaders. So we decided to recruit for a class that was going to be super hardcore.  This was going to be the place of setting a high bar for discipleship, and we were going to throw everything but the kitchen sink at the people who signed up.  We had about 50 people join us in this experiment.

The first week, we stood up and gave some guidelines.  After casting vision for the class, teaching the Bible for a while, and letting the students process, we gave them their homework – you need to share the gospel with 3 people this week.

But here was the catch – don’t come back to the class if you don’t.  Hardcore, right?

We waited and wondered that week at how many would show. Half? A quarter?

Unfortunately only 3 people came back the following week. It was a good ol’ fashioned Scottish revival.  This new training program started with a bang, but ended with a fizzle. To be candid about our heart, we self-righteously thought those people who quit were pretty much losers.  They couldn’t hack the missional life.  They couldn’t even share the gospel three times in a week.

To our shame, we didn’t love the individuals. We just wanted what they could produce. As leaders, we tried to force people to ”come and die”, and when they couldn’t live up to the expectations, we wrote them off and moved on.  Can I be honest with you?  We hurt a lot of people that way.  Some of those people were amazing, and now they’re doing great things in the kingdom.

In our attempts to avoid catering to consumerism, we forgot to love consumers. 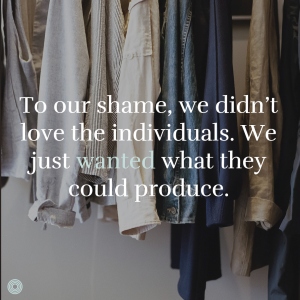 Consumerism gave me a name for the enemy, but it was a gateway to self-righteously judging that 30% of people.

God is kind however to remind me of the speck in my own eye. How can I stand in judgment and frustration over these people when in so many ways I am enslaved to the same sinful patterns?  Sure, I’ve had some victory as it pertains to church, but if I’m honest, it’s a daily battle against the powers and principalities of consumerism and I still fail.

The doctrine of consumerism is everywhere, the system of consumerism infects all our institutions, and is so ingrained in our patterns of thinking we can hardly see it.  The reality of our culture is that everyone is a consumer.  I know I am.  I’ll bet you are.

Whether we want to or not, we swim in an ocean of consumption, and can’t help but drown in it.

I think we do a great disservice to the church and to our Savior when we throw “consumers” under the bus.  These are people whom God created in His image, who have rebelled against Him, and yet share our confession of the salvation and Lordship of Christ.  Yes, we have the responsibility to challenge and confront their sin, but we cannot stand in self-righteous judgment!

I think our tone in teaching subtly started to attack people, and it actually hurt the bride of Christ. The unintended consequence of our critique was that people felt belittled, judged and ultimately unworthy of the gospel to our shame. You can kill missional culture by catering to consumerism, but we must fight to love consumers by the power of the Spirit.

Don’t cater to consumerism, but love consumers.  They need the gospel as much as anyone. 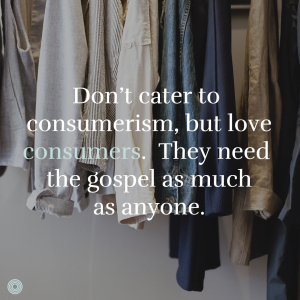 So here’s two ways we learned to fight:

Prayer will give you an affection for your people and help you not treat them like objects.

Also, I would exhort you to build ministry in your church that challenges consumerism.  Your systems must challenge the predominant actions where they aren’t consistent with the gospel.  For us, when we think about discipleship, that means meeting people where they are, and taking them where Jesus wants them to go.  So we have articulated our discipleship process this way: We are taking consumers and helping them become missionaries.

Almost everything we do attempts to love people where they are, but gently and firmly challenge them to take a next step of obedience.  We don’t lower the bar of discipleship, but we have realistic expectations now of how people change in a consumer culture.

The most freeing truth for me, as a leader in consumer culture, is that Jesus died for consumers so I don’t have to.  When you’re leading consumers, remember the truth of the gospel:

Jesus died for consumers so we can be patient with them, but Jesus also rose in victory over consumerism so we can be free from it.

What mistakes have you made in loving consumers?