Feeling Under Attack? Then This is for You

By Nathan CedarlandApril 17, 2018 No Comments

You’re dealing with health issues again. Someone you thought was committed to doing life with you has disappeared. Someone else is saying things about you that aren’t true. A magnetic individual in your community seems to be influencing others away from the centrality of the gospel. Many around you seem confused, disillusioned, and just plain tired of trying to live as a community on mission. And who are you to even be trying to lead others on mission anyway?

If any of that resonates with you then you can certainly relate to a guy named Timothy who was trying to help lead and strengthen the Jesus communities in Ephesus way back in the first century. Among other things, he experienced health issues (1 Tim. 5:23), faced pressure from false teachers (1 Tim. 1:3-7, 2 Tim. 2:14-26, etc.), and wrestled with insecurity about his ability to lead others (1 Tim. 4:12-14). This means that Paul’s words of encouragement to Timothy are incredibly relevant for us as we face similar challenges in our own context.

One of the ways that Paul helps Timothy (and us) in the midst of these difficulties is by putting things in perspective, by framing a context that causes us to adjust our expectations. For example, if your next-door neighbor just decided to leave his wife and kids for a year to go backpacking around Europe, you would be inclined to view his behavior as irresponsible and unloving. But if your neighbor is in the military and is deployed for a year, his behavior is now viewed as heroic. In this case, your neighbor’s wife, understanding her husband’s duty, has certain expectations that allow her to tolerate and even support what in other circumstances would seem inexcusable.

So when Paul charges Timothy to “Share in suffering as a good soldier of Christ Jesus.” (2 Timothy 2:3), he is setting a context for Timothy that will help him put things into perspective. He is saying, “Timothy, this hard stuff that is happening…this is normal. We are at war! A spiritual battlefield is the context of our mission. It’s going to be difficult.”

During WWII, practically the entire population of the U.S. was involved in the war effort. War bonds were purchased by those on the home front, women worked in war equipment plants, and food was rationed. The whole country lived with a wartime mentality. It was normal life within the context of a world at war.

Paul encourages Timothy to have this same mentality, “No soldier gets entangled in civilian pursuits, since his aim is to please the one who enlisted him.” 2 Timothy 2:4. I’m not trying to be an alarmist. Yes, our lives should be filled with joy and peace knowing that the King has invaded our hearts and is carrying out his transformative work in the world through us, but we must also remember that there is still an enemy at large who seeks to steal, kill, and destroy. There is an evil force opposed to the advancement of the kingdom of light and until it is finally removed, this world will remain a battlefield.

There are Deserters in Every War

Knowing that we’re in a battle helps make sense of the experiences of betrayal and abandonment that we sometimes face on mission. In 2 Timothy 1:15, Paul reminded Timothy of how numerous fellow workers had forsaken him. “You know that all those in the province of Asia have deserted me, including Phygelus and Hermogenes.” This happened to Paul and we shouldn’t be surprised when it happens to us. Of course, we must guard against an attitude of indifference and always check our own motives and actions, but after all of that is done, there will still be some who will turn away. We need to be prepared for this reality and prepare those who we’re training up to face it as well. 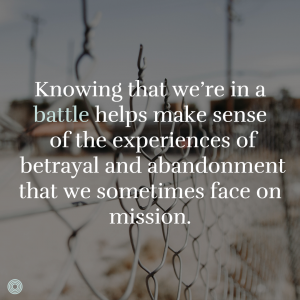 A Band of Brothers and Sisters

This is a battle that we can’t fight alone. We have a tendency to apply the armor of God passage in Ephesians 6 to us as individuals when in reality it is describing the church as an army fighting together against the forces of darkness. In 2 Timothy 1:16-18 Paul remembers a loyal friend who was faithful to him at all cost:

“May the Lord grant mercy to the household of Onesiphorus, because he often refreshed me and was not ashamed of my chains. On the contrary, when he was in Rome, he diligently searched for me and found me. May the Lord grant that he obtain mercy from him on that day. You know very well how much he ministered at Ephesus.”

Later in chapter 4 Paul highlights the dedication of his friend, Luke. When all others had left him, he writes, “Only Luke is with me. Get Mark and bring him with you, because he is helpful to me in my ministry.”

May God help us to be like Onesiphorus and Luke, to be faithful brothers and sisters who remain loyal to King Jesus and committed to our fellow soldiers especially in the heat of battle.

Unlike in other wars, in this epic conflict we have confidence that our King will ultimately triumph. In the midst of the battle, we must continually remind each other of Jesus and of his victory over sin, Satan, death and hell. “Remember Jesus Christ, risen from the dead and descended from David, according to my gospel, for which I suffer to the point of being bound like a criminal. But the word of God is not bound. This is why I endure all things for the elect: so that they also may obtain salvation, which is in Christ Jesus, with eternal glory.” 2 Timothy 2:8-10. Jesus has overcome! Let us endure with him knowing that we will also reign with him.

In light of this, as we fight side by side in community and on mission, let us take these words of Paul to heart: “This charge I entrust to you, Timothy, my child, in accordance with the prophecies previously made about you, that by them you may wage the good warfare, holding faith and a good conscience.” (1 Timothy 1:18-19).

What would it look like to apply the armor of God to your community and not just to yourself as an individual?

Nathan Cedarland served as an elder at Kaleo Grays Harbor, a bilingual (Spanish and English) church family in Aberdeen, WA for 12 years. He is now leading a church plant in southern Mexico and working to train up future church planters for that region. He is husband to Julissa and dad to their seven kids. In his spare time, he enjoys writing fiction, making movies with his kids, and blogging at cedarlandia.com.