What God Has Done With Us - Saturate
CommunityDiscipleshipMissionMissional CommunityPastoringSocial Justice

What God Has Done With Us

Feasting With the Poor: Part 3 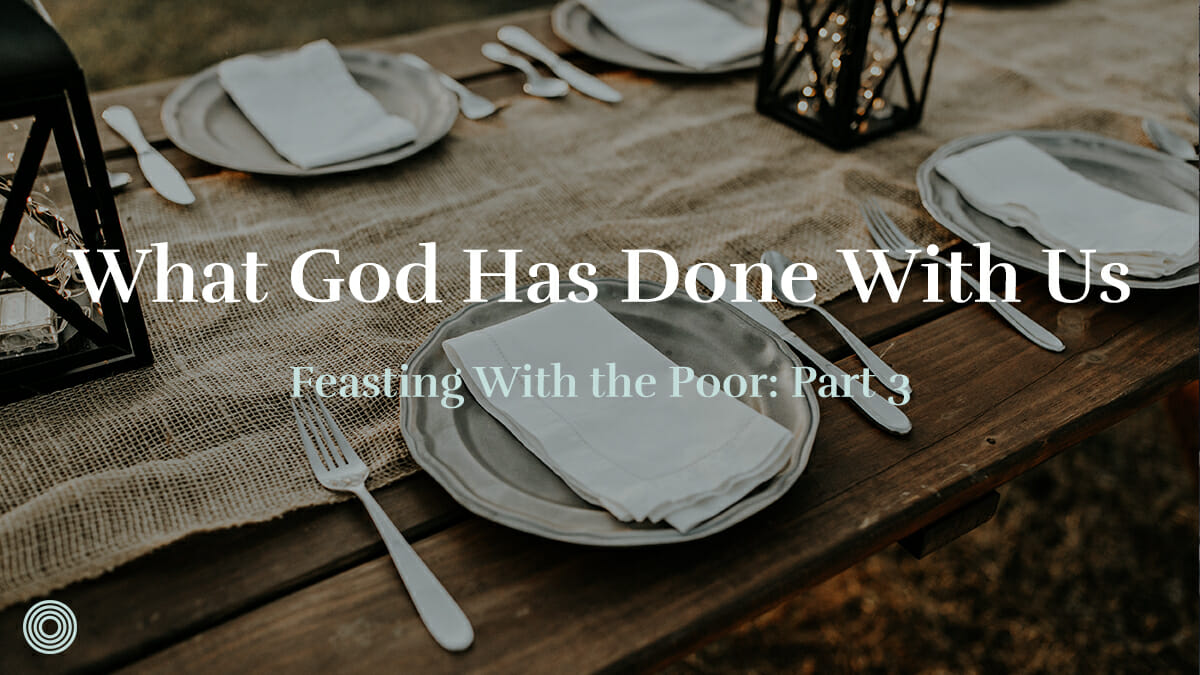 That’s why when we invite the poor and the blind and lame and the crippled into our home, it gives a foretaste of Heaven. It’s a picture of what that is going to be like.

A few years ago, several street kids began coming to our weekly meals. We had this one girl that would never come inside. She hated God. She was an atheist, and she would never come inside our house. She wouldn’t even come in to get the food. She made her boyfriend bring her the food, and she would take the food and just leave. She wanted nothing to do with our house, or what we were trying to do.

Then, one day, she came inside, and she ate. Then one day she stayed for the Bible study. And she was so smart. She was asking all these really antagonistic questions, but then she would listen. And she would nod, and afterward she came, and she’s said to me: “This is amazing. Thank you. This is great. I can’t wait to come back.”

She started coming back more and more. Then she got pregnant. She went to Planned Parenthood to kill her baby, and they called her name. She got up to follow the nurse, and I don’t know what happened, but God did something. She said she turned around, and she was scared to death. And she just ran. She ran out the doors, down the sidewalk, through the parking lot, and she ran until she couldn’t see that three-story building anymore.

A couple of days later, she hit rock bottom, and she tried to kill herself. She woke up the next morning, somehow. I don’t know how. She was still alive, and she didn’t know how either. So she decided to come by our house and to tell us that she gave up, and she wanted to be a Christian. A couple of weeks later, she came again and she asked me if me and my wife would adopt her baby.

Now I have this little three-year-old boy named Malachi, and he’s the cutest, the most precious little thing in the world. His mom is off the streets. She’s a senior at U.C. Davis. She has a full-time job. She’s getting straight A’s. She had been on the streets since she was in 8th grade. She’s coming back for Christmas, so she’s gonna spend Christmas with us. It’s gonna be sweet.

It’s crazy. On a side note, my kid’s grandpa, grandma, and dad also come to my house every Friday night. They’re all meth addicts, so they come to my house every Friday night for food. And we take family pictures with them every once and a while. His mom’s not there anymore because she got out of it, praise God. She escaped, but the rest are still in it.

Call It a Feast

So the call of Luke 14 is to expand our horizons and to break down barriers that divide us from others by inviting those who are radically different from us into our homes and into our lives. And when we do this, Jesus says you call it a feast.

You see, I think that there’s a reason that Jesus calls us to invite those who can never pay us back into our homes and into our lives, and I think there’s a very specific reason that when we do, He tells us we’re supposed to call it a feast. Do you want to know the reason? The reason is because that is exactly what our God has done for us. 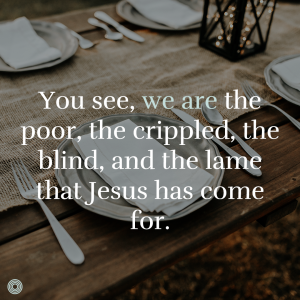 Heaven Will Be a Feast

You see, we are the poor, the crippled, the blind, and the lame that Jesus has come for. And guess what He’s come to do? He’s come to invite us to a feast. Back to His home for a feast; that’s what He came to do. You may not feel like it, but the Bible says you are spiritually poor, and that you have nothing to offer God. You know why it’s really important that we have people that can’t pay us back in our homes? Because those are the only people that God has in His home.

Spiritually poor, unable to pay Him back. Spiritually crippled, unable to get to Him on our own. Spiritually blind, unable to even see our need for Him unless He were to open our eyes. Revelations 3:17, “For you say I’m rich, and I have prospered and I need nothing, not realizing you’re wretched, pitiable, poor, blind, and naked.”

That’s who all of us once were. We were born dead in our sins with nothing to offer God. There could simply be no greater gap than the distance between us and God. He’s perfect. We’re riddled with imperfections. He’s pure. We’re defiled. He’s infinite. We’re finite. He’s good. Our hearts are deceptive and wicked. Nevertheless, the Bible tells us Jesus looked on us with compassion, and He left Heaven. And He came to Earth to invite us to a feast. And make no mistake, Heaven will be a feast.

We Are Honored Guests

Heaven’s not a soup kitchen. And Jesus isn’t gonna be there with plastic gloves on His hands making sure we each get enough. And in Heaven, you and I aren’t some token guest. We’re not the token poor there to meet His quota. No, in Heaven, we’re the honored guest. We’re the wife, the bride of the groom. It’s a feast for us.

Here’s the thing. How on earth are the poor, who already struggle deeply with feelings of insecurity and shame and inferiority, supposed to believe that there is a God who is holy and pure and who loves them enough to invite them into His spotless house for a massive feast, if His people on Earth won’t even invite them into their earthly homes?

Is the Holy Spirit bringing to mind someone for you to invite to your table?