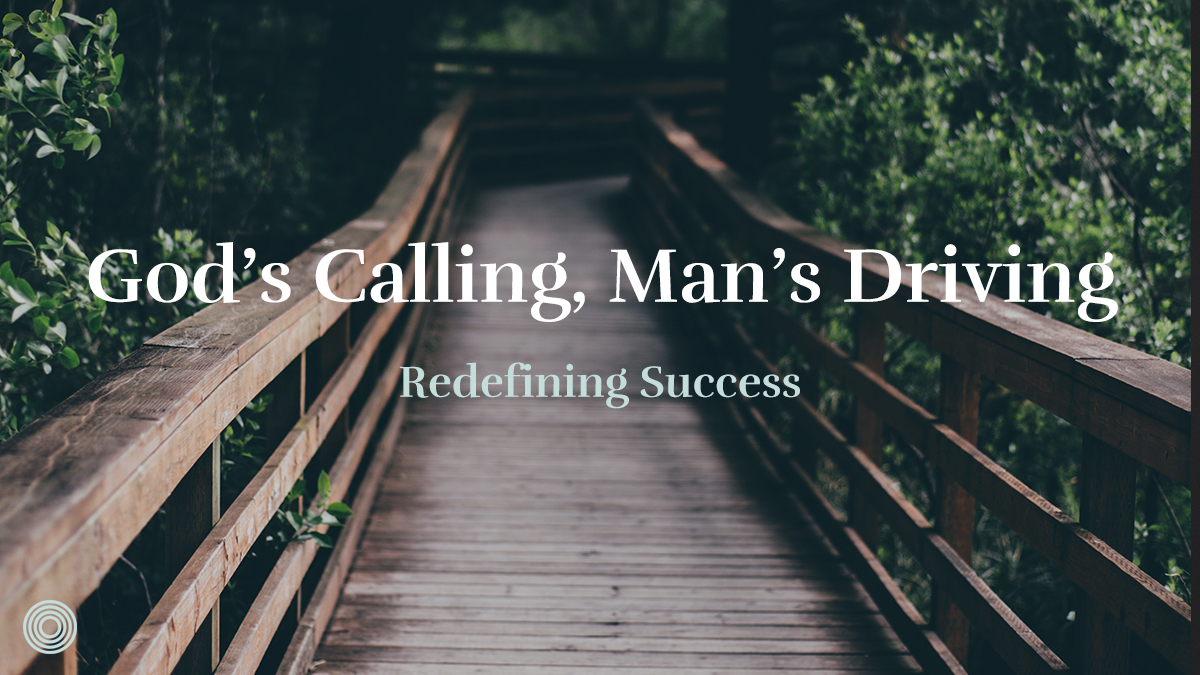 If you’re a leader reading this, be encouraged: your mission is to teach people to be content with waiting on the Lord.

“For consider your calling, brothers; not many of you were wise according to worldly standards, not many were powerful, not many were of noble birth, but God chose what is foolish in the world to shame the wise… it is written, “Let the one who boasts, boast in the Lord.” (1 Cor. 1:26-27, 31)

From Genesis to Revelation, God calls the most unlikely of characters. Consistently, scripture seems to define success as learning to “boast in the Lord” vs. boasting in ourselves (1 Cor. 1:31). Character-wise, we’re being formed into the kind of people who will be available, faithful and consistent. Problem is, none of us start out that way. In fact, scripture says that we all start out as fools (1 Cor. 1:26). So what’s God’s program for getting us from foolish to mature?

Thomas Keating said, “the spiritual journey is not a career or a success story. It is a series of humiliations of the false self that become more and more profound. These make room inside us for the Holy Spirit to come in and heal. What prevents us from being available to God is gradually evacuated. We keep getting closer and closer to our center. Every now and then God lifts a corner of the veil and enters into our awareness through various channels, as if to say, ‘Here I am. Where are you? Come and Join me.’”

I don’t know about you, but what Thomas Keating said has been true in my story. Consistently, the times I’ve been able to hear the Holy Spirit clearest have been in failure. Though I’ve had a few successes, failure has been the primary means through which I’ve changed.

Most of us know we’re a work in progress and have a long way to go. We have a victory every so often, but then a string of failures. Sometimes we accomplish a noteworthy thing, but the rest of the time we’re wading through uncertainty. The beautiful part is, God’s invitation is mostly about being with him and being changed (Rom. 8:29-30). If we can get this, we’ll be far more content with our lives and work, put less pressure on others to get things right, and trust God to accomplish the tangible stuff (Psalm 127:1). Unfortunately, the way of humanity is to forget the way of dependence, believe our worth comes from task accomplishment, and become self-sufficient. But God’s grace won’t allow it. God’s way of discipleship is to get us out of self-absorption and into a life of love. This is what it means to be called. Inevitably this ends up looking like greater love for God and for other people (Matt. 22:36-40). Think about Moses.

Numbers 12:3 records that Moses was the most humble man on the earth and that he spoke with God “mouth to mouth” (Num. 12:8). Isn’t that what we all want? If we knew up front the path to this kind of life, I promise, most people wouldn’t choose it. And most don’t.

Moses was a miracle baby. When all Hebrew boys his age were being murdered (Ex. 1-2), Moses survived. Being found in a basket floating in the river, Pharaoh’s daughter took him in and raised him as her own (Ex. 2:10). How crazy that a slave baby could end up as the grandson of Pharaoh! But remember God’s pattern, he chooses the unlikeliest of characters.

Many years later, Moses witnessed injustice as an Egyptian taskmaster abused a Hebrew slave. Moses took matters into his own hands and murdered the Egyptian (Ex. 2:12). This action made Moses a fugitive and he fled for his life. Forty years later, what had Moses become? God found Moses as a dirty sheep-herder. The world might have defined Moses as a failure at this point. But that’s where God met him, called his name and gave him instructions (Exodus 3). This is what calling means—to be known, named, noticed, and included in on God’s mission. But remember, God starts with fools. Slowly, day by day and year by year, he changes them into people rich with character, dependent on him. Here’s how.

Along the Exodus adventure, Moses asked questions about how God would lead Israel out of Egypt. He asked God about the plagues, the parting of the red sea, the cloud in the desert, etc… but (this is important), Moses didn’t engineer any of those things. God did all the work. Because God called Moses to lead it, Israel came to Moses whenever they grew uncomfortable. Consistently, when they demanded Moses lay out a game plan, Moses didn’t give them what they expected. This only led to frustration and loss of focus because the answer consistently came, “The Lord will fight for you. You only need to be still” (Ex. 14:14). Can you imagine being a part of a church where your leaders consistently said, “I can’t give you an answer, just be still and wait to see what God will do?” It sounds crazy, I know, but this is the calling.

To be called and on God’s errands means to wait for instruction. Jesus even said, “I only do what I see the Father doing…” (John 5:19) As leaders, our work is really about a lot of waiting on the Father and helping those who follow learn to do the same. Since we can’t lead anyone to a place we haven’t been, we have to get acquainted with stillness and ambiguity.

Most of our problems occur when we feel the pressure to produce a plan prematurely. God’s solution is to allow us to fail. Yet when we fail, God meets us in the hurt. It’s really a beautiful and brilliant cycle. God allows us to drive sometimes, and sometimes he even uses it. But since God wants the glory, our efforts are usually thwarted because God’s way is for us to learn to boast in his power alone. 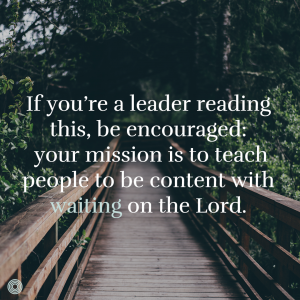 I’ve had some successes. I’ve seen many come to faith, lives restored, and the list goes on. In the business world I’ve worked with leaders in huge companies, made decent money and even been able to rub shoulders with relatively well known people. But I’ve also failed a lot.

I’ve lost everything financially multiple times, lost a church plant, lost my health, lost my mind, watched my business explode, and then implode (many times), and the list goes on. If success were judged by tangible accomplishments, I’d be found lacking. But the paradigm of scripture doesn’t work like that.

In my experience, every time I’ve failed God has met me there, spoken to the pain, and changed me. Since healing and change usually hold hands with pain and suffering, I’m happy to say, though I’ve suffered a lot, I’ve been healed a lot too. God’s ways are not our ways and his thoughts are not like ours (Isa. 55:8-9). It’s in the broken places where God does the best stuff because he’s a healer. God found me a fool, and he’s turning me into someone who enjoys boasting in his work.

Eugene Peterson writes that we get “the strength to stand and the willingness to leap, and the sense to know when to do which,” when we remember God’s ways and learn to trust in his promises (A Long Obedience In the Same Direction, p. 171). The wisdom to know when to stand or leap takes time. Therefore leadership work done in the context of mission isn’t quick. If you’re a leader reading this, be encouraged: your mission is to teach people to be content with waiting on the Lord. Because most people don’t, your mission is to teach people to interact with the subsequent pain. But be encouraged, there’s joy on the other side (Psalm 30:5).

Paul’s words in 1 Corinthians 1:26-31 remind us that God calls the foolish and the direction he’s moving them is that they’d boast in His work, not theirs. Raising up everyday disciples means learning to engage the issues that everyday people face. Leadership can’t be done primarily from an office. On paper strategies will only get you so far. You’ve got to learn to do the ongoing work and get in there with everyone.

I believe making disciples in the context of a community on mission is the way the church of Christ was meant to function. Getting here has been a slow and painful journey. In my next blog I want to give you a set of questions I believe will serve you as you seek to make disciples of Jesus in the everyday things of life.

I’ll end by saying this — tangible results do count. But we can’t drive that. Only God does. In the meantime, we must remember we are in the business of partnering with God to turn fools into those who will boast in him. What a mess, what a calling. Doing that faithfully redefines what success looks like.

How have you seen God use seasons of waiting to grow your community’s trust in the Lord?