Sizing Up the Holy Spirit

Knowing the Spirit Who Creates, Sustains, and Transforms Everything

By Jonathan DodsonOctober 9, 2018 No Comments 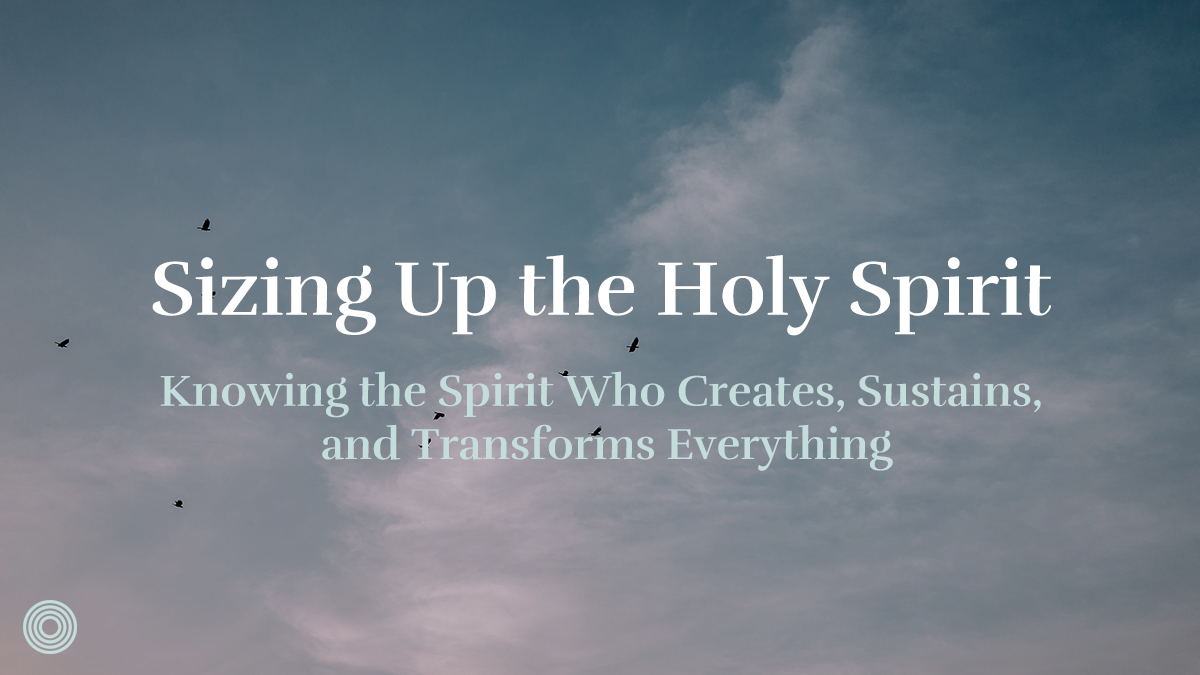 The Holy Spirit. Three words couldn’t divide the church more. I suppose “I hate you” is up there, but that’s more of a division between people rather than churches. Entire swaths of Christianity have divided over the third person of the Trinity. This division, over the place of the Spirit in the Trinity, left the Eastern Church (Orthodox) on one side and the Western Church (Roman) on the other, which, among other factors, eventually led to what was called the Great Schism.

Doctrine does divide. Attempting to forge unity, I’ve heard some people say, “Doctrine doesn’t matter.” Typically, they mean if we would all lay down our doctrines and just focus on Jesus, we would all get along. But that assertion is also doctrinal. It’s saying to everyone else, if you lay down what you hold dear, and believe in the Jesus-only doctrine I consider precious, then we can all get along. This approach is well meaning but exclusivist, privileging its own view. It also leaves out the Father and the Spirit. We need to dig deeper. Why does doctrine over the Holy Spirit divide?

Person of the Spirit

The fault line of division over the Spirit today is quite different from that of the early Church. The “great schism” affecting most of the modern church is over the gifts rather than the person of the Spirit. The division falls rather neatly along just a few of the Spirit’s more effusive gifts, things like speaking in tongues, prophecy, healings, and miracles. To simplify it for the moment, there are charismatics who treasure and practice these gifts, and cessationists who adamantly insist most of these gifts are no longer in effect. The groups shore up, take sides, and accuse one another of wary extremes. Some remain in the middle, self-described “open-but-cautious.” Entire denominations, seminaries, and churches divide over their views of these gifts of the Spirit.

Wherever you fall in this debate, I think there’s a deeper issue at stake. It’s interesting that we don’t divide over spiritual gifts like service and mercy. We don’t part company over whether mercy is still in effect or if service is still valid. And there aren’t too many divisions over faith, hope, and love, what Paul called “the higher gifts” (1 Cor 12:31). Everyone believes in those. Maybe, just maybe, we’re fighting over the wrong gifts. Certainly, there are things worth debating. Paul opposed Peter for his gospel-compromising racism. But what is the greater issue at stake here? Quibbling over a few of the Spirit’s choice gifts, we’ve missed the most important gift of all—the Holy Spirit himself. 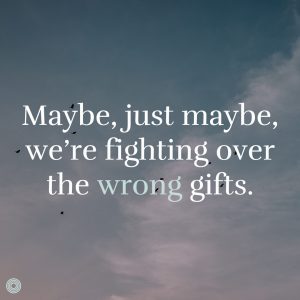 Pigeonholing the Spirit based a few of his gifts is like sizing someone up after a single conversation. I’m not a big Quinten Tarantino fan. His films are too violent for me. I’ve seen clips here and there, and at the behest of several friends I did watch Inglorious Bastards. I’ll admit the initial interrogation scene is riveting, but I still find the flippant ultraviolence deplorable. So my initial impression of Tarantino was not positive, but that was before I met him in person.

One afternoon as my wife and I were waiting to be seated in a hole-in-the-wall Mexican restaurant, I glanced over the hostess’s shoulder. Recognizing a guy sitting by himself in the bar, my wife turned to me and said, “Honey, I think we were in college ministry with that guy.” I smirked and said, “Honey, that’s Quinten Tarantino.” Lunch was dominated by debate over whether we would introduce ourselves to Tarantino after we were done. My wife won the debate, so we walked over to say hi.

To my surprise, Tarantino was quite affable. He asked our names. My wife made a quip about having a guy’s name, and when Tarantino heard her name is Robie, he leaned in. He asked how she got the name. As Robie told the story, Tarantino tracked the plot, asked questions, and laughed along the way with two complete strangers. After a bit more chitchat, he invited us to stay for a drink. We gratefully declined, but I walked away shocked by how kind and inviting he was. Based on his filmography, I figured he’d be a total jerk. If I’d stuck with my initial impression of Tarantino, I would have been wildly wrong.

Sizing the Holy Spirit up based on a few of his gifts is a big mistake. If we relate to the Spirit primarily regarding miraculous gifts and whether they are operative today, we distort and limit our understanding of the third person of the Trinity. He should be known for much more. Who is the Spirit? Is he a person or a spiritual force? How are we meant to relate to him? Can we pray to the Spirit? Can we worship the Spirit? What is his role in creation? Is he present in culture? What will he do in the future? And what does being filled with the Spirit look like after all? These are some of the questions I’d like to explore. Instead of relating narrowly to the Holy Spirit, I’d like to broaden our engagement with him by touring aspects of his vast character that are often unexplored. In focusing more on who the Spirit is, we may find ourselves less divided.

This is an excerpt from Jonathan’s newest book, Here in Spirit. Now available!

How has your understanding of who the Holy Spirit is changed the way you in engage your life in community and life on mission?

Jonathan is the founding pastor of City Life Church in Austin, TX which he started with his wife, Robie, and a small group of people. They have three wonderful children. He is also the founder of Gospel-Centered Discipleship.com, which produces resources to help make, mature, and multiply disciples of Jesus. Just about any week you can catch Jonathan listening to M. Ward, watching sci-fi, and going for walks.