The True Story of Hope

By Brad WatsonDecember 3, 2018 No Comments 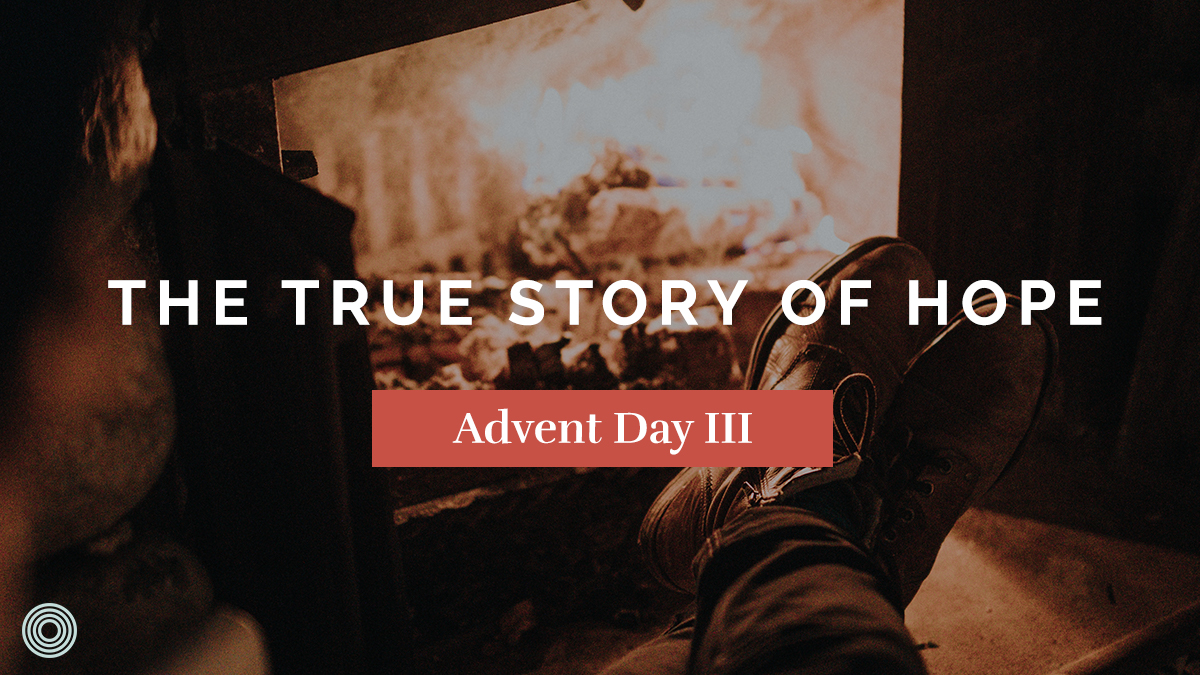 On a December morning in Newtown, Connecticut in 2012, children and teachers were likely gearing up for a day filled with gluing cotton balls onto Santa beards when a 20-year-old man came into the school shooting and killing 20 children between the ages of six and seven. Six adults were also killed. There should be a bigger and weightier word than “tragedy,” but I can’t find one.

In the days and even years following the murder and death of 27 humans, we focused on mental health: how has the human brain and emotions gotten so perverted? It also focused on guns: how did humanity create such efficient, cold, and callous tools for death? I remember talking about safety: why can’t we protect our most young? What happened was death. It was evil. It was sin. And while for many of us in America it was a shock to our system, this was also just another news story in the grand scheme of genocide, greed, war, abuse, assault, murder, and terror. This is our world. One of the reasons I love the Bible is not just it’s beauty and purpose, but also its realism; the story of the world is not right. The reason I’ve given so much of my life to reading the Bible is because it also offers the story of what will make the world right, new, and beautiful. Strangely, Advent takes us into both the broken and the hope.

The Story of Advent

Genesis 2 is the arrival of the world with humans. What a thought. The beginning of humanity. Genesis 2 describes the perfect garden for humans to thrive. There are rivers and trees and animals. And God (like a potter) forms man, breathing into the nostrils, life. Imagine that! God so close in creation that He put His breath in him and that breath creates life. Humanity doesn’t exist apart from God’s intimate presence and generosity. God walks with the Adam in the cool of the day, in rest and in labor. Then creates for Adam human relationship. Human companionship. When Adam sees Eve, he says: “This at last is bone of my bones and flesh of my flesh.” Believe it or not, this the beginning of the Advent Story.

Next, Adam and Eve rebel against the living God who breathed life into them. The Maker and Sustainer of their entire universe. The Serpent came and asked: “Did God really say if you eat it you will become like God? He doesn’t want that.” Then eating the fruit of the Knowledge of Good and Evil, they knew shame, hiding, and guilt. But, God comes to them. He calls to them. He asks for them. This is the second act of Advent; God came to humanity (even in the early pages of this story), seeking the ones He loved. He also comes explaining justice—the brokenness of shame, guilt, and striving to be god will result in catastrophic relationships, work, birth, environment, futility, and separation from the source of Life. In this second act, God seeks the people He formed to be His image and declares the reality of rebellion away from Him: a life of death. He informs them of a different world, a world we inhabit today.

But in the midst of that curse, God gives a promise: a Child or Seed from Eve will oppose and do battle with Evil—with the Serpent. The Serpent will be destroyed, but it will cost the life of this Heir of Adam and Eve. One day, a child of Eve will crush the Serpent and be bruised. The promise of redemption and restoration one day. This is the third act of Advent: Promise. Hope. This is the one we often inhabit, of God’s plan to re-create the world. God’s promise to send a Savior.

There are many promises. In Genesis 15, God promises to create a family that will bless the whole world. That the heir to Abraham will be a blessing. Blessing here isn’t a little gift; it’s a making right. Hope from a Child. Hope from a Family. In Deuteronomy 18, it expands to a promise of a prophet who will speak truth and life. A Son, a Family, a Prophet. In Psalm 18, and in so many other places, God promises a King who will sit on the throne and make all things new. He will reign and there will be redemption. God promises to send rescue and to send blessing.

Just as God pursued Adam and Eve in the garden as soon as they sinned, God pursues humanity in the midst of our sin in Jesus. His birth is the culmination of promise. A Child. A Son. A Family. A King. This is the forth act.

Jesus’ life is filled with battling the curse of sin and evil itself. He battles with words. He battles with stories. He battles with actions. He battles with friendships. Ultimately, He battles it with death—His own. Bruised to the point of death. But Jesus isn’t a martyr. He’s a King—the King. Pulling back centuries of the curse, Jesus is raised from the dead by the power of the Spirit. He crushes sin, death, and evil. Sparking a revolution that none can be compared to, God-breathed closely and intimately into the souls of men and women, raising us from the dead. He conquered the shame of the garden. The evil of the world. Those who were far off have been brought close. Advent: redemption has arrived.

Act five. Just as God sent the promise, He sends the Church. He sends His newly formed Family of adopted sons and daughters into the world by the power of God. In darkness, we find opportunity for light. In evil, we see calling to push back. In sin, we see the power of God to redeem all things. This is our moment in the Story. Christ has arrived. He has redeemed and we are the people of redemption. We are a people who know hope in a world incomplete.

But the Story isn’t over. One day, all things will be restored. All of heaven will come to earth. The end of the Story, act six, is restoration. Hope complete.

Then I saw a new heaven and a new earth, for the old heaven and the old earth had disappeared. And the sea was also gone. And I saw the holy city, the new Jerusalem, coming down from God out of heaven like a bride beautifully dressed for her husband. I heard a loud shout from the throne, saying, “Look, God’s home is now among his people! He will live with them, and they will be his people. God himself will be with them. He will wipe every tear from their eyes, and there will be no more death or sorrow or crying or pain. All these things are gone forever.” And the one sitting on the throne said, “Look, I am making everything new!” And then he said to me, “Write this down, for what I tell you is trustworthy and true.” And he also said, “It is finished! I am the Alpha and the Omega—the Beginning and the End. To all who are thirsty I will give freely from the springs of the water of life. All who are victorious will inherit all these blessings, and I will be their God, and they will be my children. – Revelation 21:1-7 (NLT) 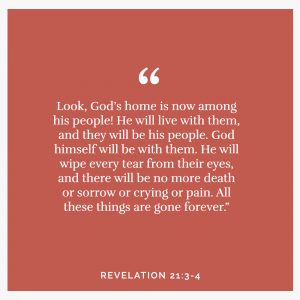 Then later, there’s this description:

Then the angel showed me a river with the water of life, clear as crystal, flowing from the throne of God and of the Lamb. It flowed down the center of the main street. On each side of the river grew a tree of life, bearing twelve crops of fruit, with a fresh crop each month. The leaves were used for medicine to heal the nations.

No longer will there be a curse upon anything. For the throne of God and of the Lamb will be there, and his servants will worship him. And they will see his face, and his name will be written on their foreheads. And there will be no night there—no need for lamps or sun—for the Lord God will shine on them. And they will reign forever and ever.

Then the angel said to me, “Everything you have heard and seen is trustworthy and true. The Lord God, who inspires his prophets, has sent his angel to tell his servants what will happen soon.” – Revelation 22:1-6 (NLT)

This is the Story of Advent, of Hope’s arrival in the birth of Jesus in Bethlehem, and the arrival of hope in His arrival that is to come. And we, who live in this true story of the whole world get to make this declaration along with the Holy Spirit to all those around us from Rev 22:17 (ESV), “Come. And let the one who is the thirsty come; let the one who desires take the water of life without price.”  We declare hope. We invite people into the redemption and restoration of Advent. All the while, we echo this classic refrain for this season. We say it in every aspect of life: “Come, Lord Jesus!” (Rev 22:20).

The Story acknowledges and battles the horror of our world. It also offers the most hope. How can you, how can we, be people of the mission of God in declaring the Hope that has come and the Hope that is to come?