Jesus Came into the World

By Brad WatsonDecember 4, 2018 No Comments

“Jesus came into Galilee” is offered as hope, the first hope. After centuries of silence, of struggle, and continued sin, the resignation of the people was, “No one is coming.” And yet, Jesus came into Galilee. “No-one-is-coming” is over, replaced forever with, “Jesus came.” These words cannot be ignored. In fact, the whole of the Christian faith is bound by these words. Rescue has come. Jesus came into Galilee and His arrival itself was good news. A man named Jesus, which means Savior from the sins of the world, walked into the real world. Willingly came. Joyfully Entered. Arrived. Savior. Incarnation.

Incarnation is the first miracle of the gospel. It isn’t the turning of water into wine, the cleansing of lepers, or, for our more tightly wound friends, the preaching with authority. No, all those things are symptoms of this inciting miracle of God taking on flesh and living among us. The Apostle Paul writes saying the fullness of God was pleased to dwell in Him. John says that He was the message and the message took on flesh. Luke tells us of shepherds while Matthew speaks of wise men. Mark, in almost Hemingway minimalism says, “Jesus came into Galilee.”

God arrives with a body, with a hometown, with a voice, and with a name. 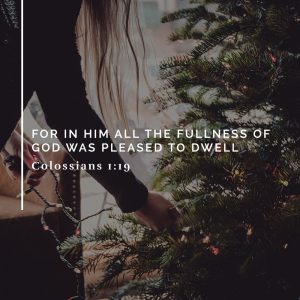 What’s in a Name

A whiteboard came into our living room as the decision-maker, the name-maker. With friends and family, it guided us through the work of “educated” people. Brainstorming led us to the name of our first child, Norah Rocha Watson. Norah, a Celtic name meaning ray of light and compassion, acknowledged my spiritual mentorship, albeit through books, under St. Patrick. Rocha and Watson, rooted this new child in her family and union of marriage from her mother and me. Maitê Rocha Watson’s name arrived from the power of God’s grace and love poured into our marriage through a year of marriage counseling. Maitê means beloved and when we say her name, we’re reminded that we are the beloved children of God. Our last child, a boy, received the name Truman Salvador Watson. When we say his name, we pray he we grow up into a true man of God, finding his masculinity as son of God. Salvador is the city that buried his grandmother. We also named him that to remind us and him of the Savior. In Jesus, salvation has a name.

There’s no more out-of-place name in our world today than Jesus. While “God” is as stylish as ever, gracing the platforms of political speeches, patriotic songs, and the thank you’s of award ceremonies, the particularity of God with a name is confrontational. Outside the confines of church buildings and community groups, His name sounds forced, confrontational, and even simplistic. But, there’s a lot in a name. Jesus, we learn and see in Matthew’s gospel, wasn’t plucked out of a baby name book, summoned from Joseph or Mary’s family trees, or a result of a brainstorm. He shall be called Jesus, the Lord will save His people from their sin.

His name is out of fashion because it, in part, makes a claim our minds find hard to digest: we have a problem with sin and we need saving. His name disrupts our understanding of self-fulfillment and self-sufficiency.

Cornelious Plantinga writes this well in his breviary of sin, Not The Way it’s Supposed to Be. “Our world has been vandalized by sin. We’ve perverted, polluted, and disintegrated God’s shalom and our shalom.” Sin is a perversion of humanity. Every sin committed twists your soul and the soul of others. Short words, middle fingers, constant consumption, jealousy, greed, and selfishness all pervert the souls of men and women. Furthermore, sin pollutes. Sin is an oil-spill on the Great Barrier Reef of humanity.

All that God intended of the world, shalom, has been marred by human sin.

While the term “sin” continues to vanish from our vernacular, its presence cannot be exaggerated or ignored. GK Chesterton famously said, “Sin is the only doctrine that we can definitively prove. All we have to do is look around, the evidence is everywhere.” Sin is the perversion of peace through the rebellion of humanity against God and others. Humanity exists to reflect the character, creativity, and compassion of God, and yet, our thoughts, relationships, actions, work, economics, and politics rarely align with His justice, mercy, and compassion. We can literally see it everywhere, at our dinner tables, at our workplaces, in our schools, and on the news. By the time you are two years old, you are already well acquainted with sin. You’ve tasted the darkness of humanity.

However, it doesn’t simply exist “out there,” being done to us; it exists within us. We’re familiar with the internal rage when we don’t get what we want, the manipulation, lying, stealing, cheating, lusting, abusing, and using of others for our own comfort—even the ones we claim to love.

The opening five books of the Bible make humanity’s purpose clear: trusting God’s goodness and obeying Him as God. However, we honor and worship the created things instead of the Creator. We make our own way in this world. Sin leaves us isolated from God and others as we grapple with wounds caused by others and the wounds we inflicted. While we might attempt to mask our shame, it reveals pride. While we run from our guilt, it seeps out in self-made attempts to solve what’s broken within us – sin. Sin is why we find ourselves lying alone on the kitchen floor, abused and abuser, shouting for rescue.

Jesus is a name with purpose: He will save us from sin. Praise His Name, His name of Hope. How will you prepare room for His name in your life?