Joy to the World, Good News! 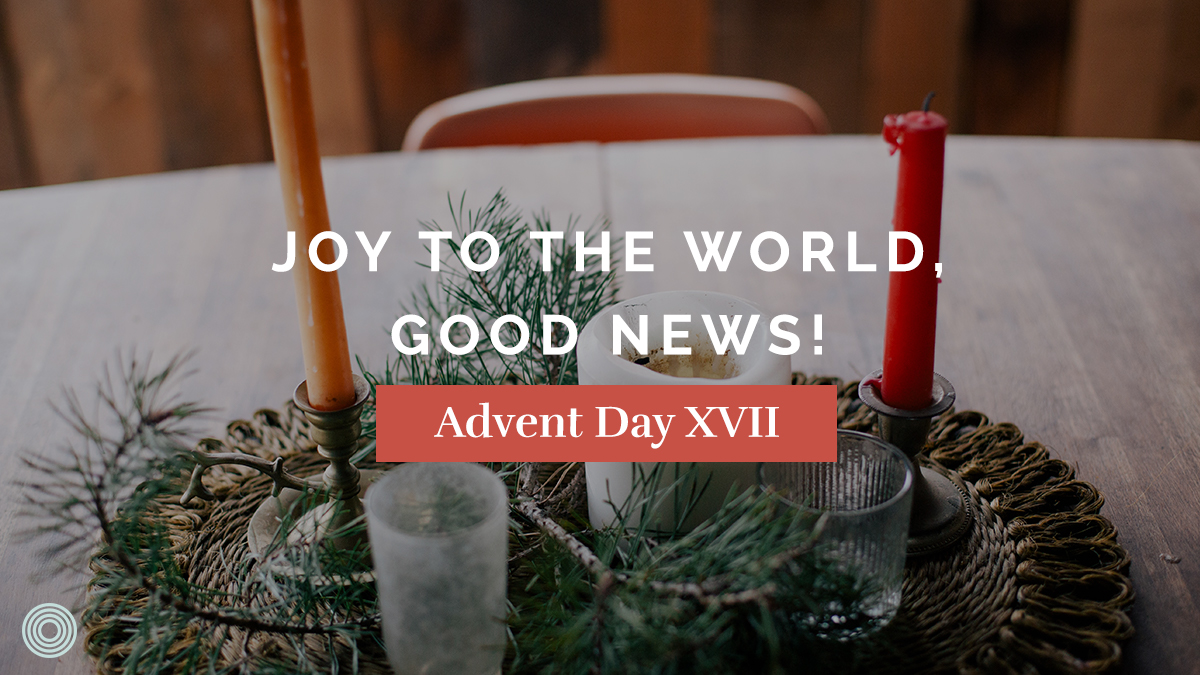 I’ll never forget where I was when I first heard the news: LeBron James was coming to Los Angeles to play for our Lakers. King James was going to come! After years of trying to read between the lines, listening to rumors, and honestly suffering through some really terrible teams, the hopes were being fulfilled. As the season approached, the fanfare increased. The skyscrapers of downtown LA became full-length billboards to LeBron. The LA Times did a ten-page spread about his first game. Ticket prices sky-rocketed as everyone wanted to see his first home game. Mass media was everywhere. I live three miles from the stadium, and I could feel the energy from my living room. The king had arrived! I cannot hide this fact – I’m so happy about it! But here’s the reality – the hope for LeBron, the announcement of his coming, and his arrival doesn’t compare to Christ’s…even in stature, excitement, and fanfare.

I often hear pastors and Christians opine the arrival of Jesus as if it was nondescript, irrelevant, quiet, and understated. What we mean is, He wasn’t born “culturally” famous and relevant. But Jesus was born cosmically glorious. This is what the angels sing, “Glory to God in the Highest!” His birth was the most glorious. The birth of most renown. The birth of history.

Yes, it happened in a small town in a conquered country that essentially served as the highway underpass of the Roman Empire. Yes, it happened to a poor family who was subject to the rule of a distant emperor. Yes, it happened outside a hospital. Yes, we cannot conceive, through our modern, Western eyes, of a birth more horrifying. But it was the most glorious. I think Luke wants us to see exactly that as he tells the story. In Luke 2:1-10 (NIV), he writes:

In those days Caesar Augustus issued a decree that a census should be taken of the entire Roman world. (This was the first census that took place while Quirinius was governor of Syria.) And everyone went to their own town to register.

So Joseph also went up from the town of Nazareth in Galilee to Judea, to Bethlehem the town of David, because he belonged to the house and line of David. He went there to register with Mary, who was pledged to be married to him and was expecting a child. While they were there, the time came for the baby to be born, and she gave birth to her firstborn, a son. She wrapped him in cloths and placed him in a manger, because there was no guest room available for them.

And there were shepherds living out in the fields nearby, keeping watch over their flocks at night. An angel of the Lord appeared to them, and the glory of the Lord shone around them, and they were terrified. But the angel said to them, “Do not be afraid. I bring you good news that will cause great joy for all the people. Today in the town of David a Savior has been born to you; he is the Messiah, the Lord. This will be a sign to you: You will find a baby wrapped in cloths and lying in a manger.”

Suddenly a great company of the heavenly host appeared with the angel, praising God and saying,

“Glory to God in the highest heaven, and on earth peace to those on whom his favor rests.” 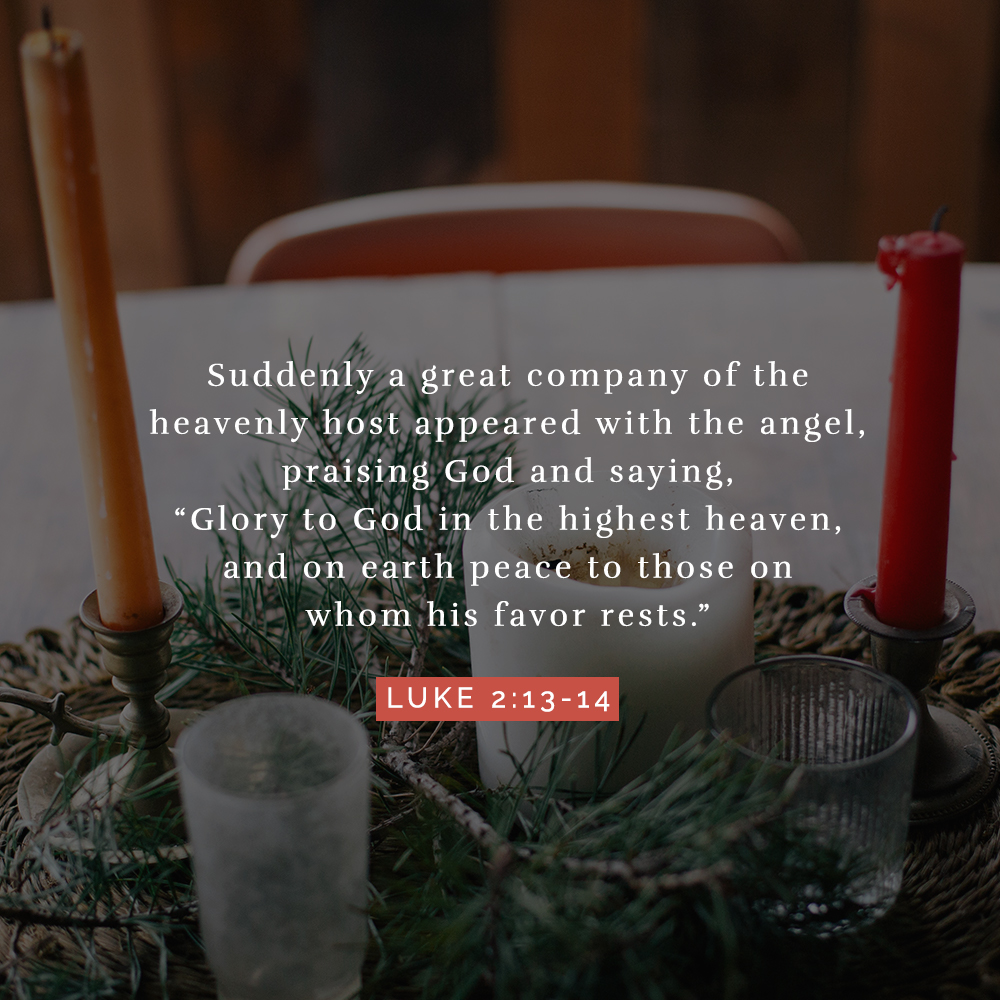 The story begins with Caesar, the Roman world, and a governor with complete power. Caesar had the power to call on the entire world to be counted so he could know how many people belonged to him. And, the world obeyed. Imagine that power to command the nations to return to their hometowns and declare themselves a subject to you. That phrase: “Everyone went to their own town” is a phrase of complete devotion to Caesar and his rule and reign. It makes me think of Isaiah 9, “the government will rest on his shoulders” and there will be no end to His government. Reading the first few paragraphs of this story you can’t help but think, “Wait, is Caesar the mighty god and prince of peace?”

In fact, I cannot help but reflect on my heart, and perhaps yours too, that kind of power is so attractive. I might even say, more appealing than the power that is to come in the life of Jesus, because it’s a power I can (theoretically) achieve apart from anyone else. If Augustus can do it, I can surely rule a kingdom on my own. Our love affair with Caesar and Empire continues to this day. We long more for the coming power through an election than the already arrived power of Jesus.

Luke goes on to say in pragmatic terms it was under the rule and power of Caesar that Jesus was born. Jesus was not simply born with a distant ruler over Him, but that lord, controlled even where Mary and Joseph went and when they went there. Caesar is lord over this baby. While much is made of the birth in a manger and surrounded by animals and without a place to stay, let me just say this – that’s how most of the world is born. Jesus was born into the class that is ruled, not the ruling class.

But then, the angel appears to shepherds. The Glory of the Lord shone around them. The glory of the Creator and Sustainer of the universe surrounded them. The narrative shifts dramatically from a man’s power to the power of Yahweh. Heaven on earth. It doesn’t matter if Jesus was born in a palace; the angel appearing would have dwarfed anything the nobility tried to pull off. No kingdom, empire, red carpet, platform, or stadium the wealthiest of nations could build would ever amount to the “glory of the Lord” shining around them. This King’s arrival shattered the divide of heaven and earth. The shepherds were terrified, as they should’ve been, and as we should be, because the framework of our world just changed. No one predicted Augustus’ birth 700 years before. No poems were written about the governor of Syria. No mention of the kingdom of Rome from visions 500 years before. But here, on this day, that long-expected promise comes fulfilled. This is good news.

The angel says, “Do not be afraid. I bring you good news that will cause great joy for all the people. Today in the town of David a Savior has been born to you; he is the Messiah, the Lord.”

And with that, the kingdoms and authorities of this world shrink. The Savior has been born. Messiah. Lord. The most happy and heralded news to be spoken. The angel is confident. The news he delivers causes joy to all people.

C.S. Lewis wrote often on joy.  He described multiple experiences where he would have a sudden, piercing pang of longing ─ a bittersweet ache and yearning for something far-off, other-worldly, and unnamed. True Joy, as Lewis presented, is the aching for something beyond this world. It’s the yearning deep within for a sense of a home we’ve never been to. It’s a longing for a relationship that hasn’t started.

When the angel says, “Today a Savior has been born to you; he is the Messiah, the Lord,” the home we’ve longed for has arrived, the healing we couldn’t even name now has a name, the relationship we were made for has begun. In fact, He was born to us!  That’s great joy.

Born Unto You This Day!

I’ve been in three delivery rooms. When the babies appeared and cried, nurses took them and cleaned them off gently and then handed these babies to me like a precious present. I have no idea what the volume was like in that sterile environment, but I couldn’t hear a thing. Each time I found myself whispering, afraid, overcome, and delighted. They were born to me.

God has come toward you, toward me, towards the world. It’s the greatest news. Jesus, born a Savior to set the world free from the bondage of sin. Jesus born a King to conquer death. Jesus born Lord, to defeat evil. There’s never been a more spectacular birth, more prominent news.

The story of humanity shifts in Luke 2:7, “she gave birth to her firstborn, a son.” In fact, the most important part of your life and dominant plotline in your story is this: what will you do with the baby born in Bethlehem? Jesus takes over your story. And it’s great news and it causes indescribable joy.