Where the Immigrant, Asylum Seeker, and the Refugee Belong

How the True Story Shapes Our Understanding 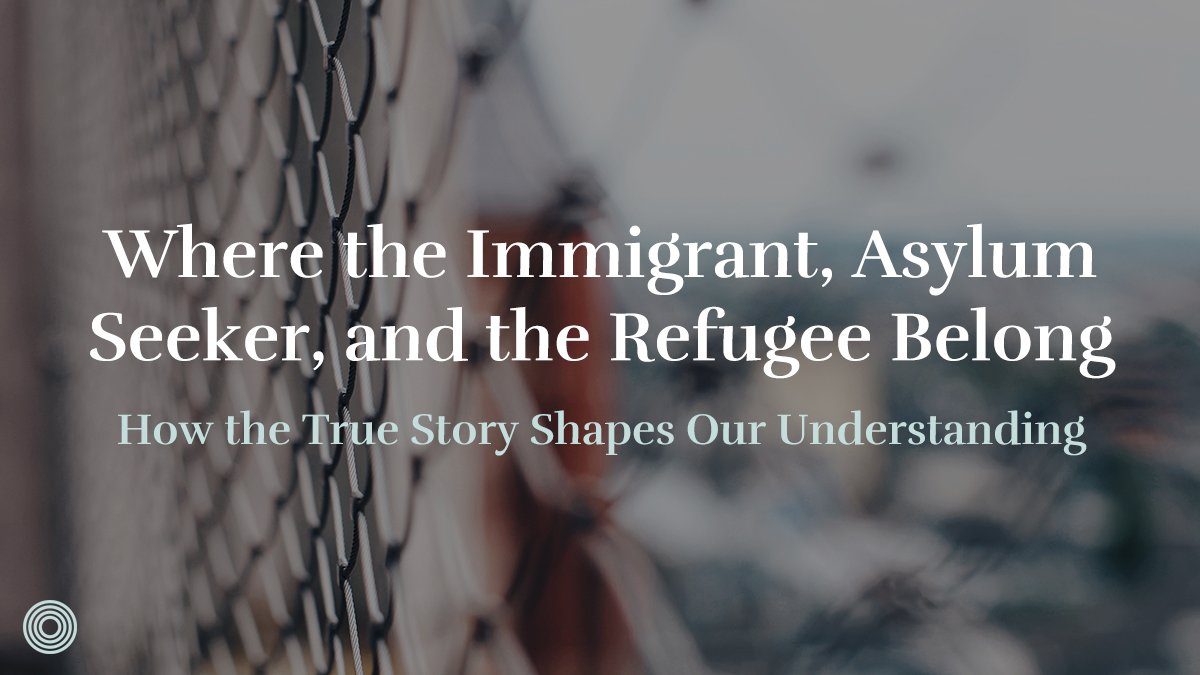 The work of every pastor, no matter their context, is to faithfully shepherd God’s people, equipping them to be faithful to the biblical story. This article is the result of three pastors wrestling with the implications of the gospel for their congregations in Arizona.

If you ask 3 people their thoughts on the “crisis at the border,” you are likely to get 4 different emotionally charged opinions. In this moment, the elders of Missio Dei would like to remind our Missio family of our allegiance to King Jesus and citizenship in His Kingdom. We want to say, the gospel is by nature political as it reaches into every dimension of creation; but it is not partisan. Our goal is not to divide but to unify our churches as a family of missionary servants who remember what story we are a part of and encourage each of us to faithfully take up our role in the missio Dei. Therefore, the question we want to wrestle with is: How does the True Story shape our understanding and consideration of the immigrant, asylum seeker, and refugee? This is not a policy document. Although the True Story should inform our kingdom minded legislators, this post is simply meant to further equip our congregations as they engage with immigrants, asylum seekers, and refugees as a daily reality in our cities.

In the beginning, God created everything and everything he made was good, right and beautiful.  As part of His good creation, He made humanity in his image to reflect and resemble Him like a Father and His kids (Gen 1:26). He also gave them a job to steward and cultivate His good creation (Gen 2:15). Different from any other ancient creation story, children, women, and men are infinitely valuable regardless of race, geographic location, gender, age, and socio-economic class. The created order was set up so that all people would flourish as they carried out their God given mandate to cultivate the hidden potentials of creation.

Shortly into the biblical story, humanity rebelled against God. Adam and Eve, the first humans, were deceived and believed God wasn’t trustworthy. Instantly, curse swept over the creation. Shame and blame immediately stained the dialogue people had with each other and with their God.  In humanity’s rebellion, they were displaced from the garden. And the story only got worse. Instead of cultivating the creation out of a love for God and neighbor, humanity fought for power and position over one another. Cain murdered Abel (Gen 4), unbridled violence resulted in a flood (Gen 6:11-13), and humanity created a civilization to fuel their pride (Gen 11:4). In Act II of our story, we recognize humanity’s past and present tendency to exploit, marginalize and dehumanize our neighbor.

But God wasn’t done with His broken creation. In Genesis 12, God sets aside a particular family for a universal mission. It is through Abram whose family becomes the nation of Israel that God would enact his plan of redemption to bless all the families of the earth (Gen 12:3). See from the beginning of our Story, God was on a mission to bring people from every race, geographic location, gender, age and socio-economic class back to himself. But not just to invite the stranger in our midst but to give them a place of belonging, a new family.

All throughout the Old Testament, we see God’s proactive, protective, passionate care of the marginalized. (immigrant, orphan, poor, and widow.) He writes into the laws of Israel specific measures to ensure that marginalized people are being taken advantage of and not exploited or avoided (Exodus 22:21-22; Deuteronomy 10:17-19; 14:29; 16:11-14; 24:17-21; Psalm 103:6; 146:7-9; Isaiah 1:17; 58:1-14; 61:1-11). Israel was supposed to be a contrast-community where even the immigrant, refugee, and asylum seeker would be re-humanized as an image-bearer of God and be welcomed into the community of God’s people. Ultimately, Israel failed to live out their identity of being blessed to be a blessing but again God wasn’t done with His creation.

It isn’t very long into Act IV of the True Story that we see with Mary and Joseph, the parents of Jesus, fleeing to Egypt because of violence and murder. At some level, we must wrestle with the reality that during his years on earth, our King was an asylum seeker. As Jesus grew in wisdom and stature, he began his public ministry with these words:

“The Spirit of the Lord is on me,
because he has anointed me
to proclaim good news to the poor.
He has sent me to proclaim freedom for the prisoners
and recovery of sight for the blind,
to set the oppressed free,
to proclaim the year of the Lord’s favor.” (Luke 4:18-19)

The Kingdom of Jesus is centered in justice for the most marginalized in our midst so that they may experience holistic flourishing. Jesus’ entire ministry was about crossing ethnic, social, and gender boundaries so that the stranger might be welcomed in. It is this very claim, this very invitation of diverse people into a kingdom where all are welcomed to the table regardless of status or background that caused Jesus to be murdered.  But not even death could tame our King. After three days, Jesus resurrected victoriously over all evil. The curse and its effects of ethnic hostility, abusive power, and social elitism were defeated. A new day had dawned and a new humanity was being formed to again show off God’s intentions for his creation. 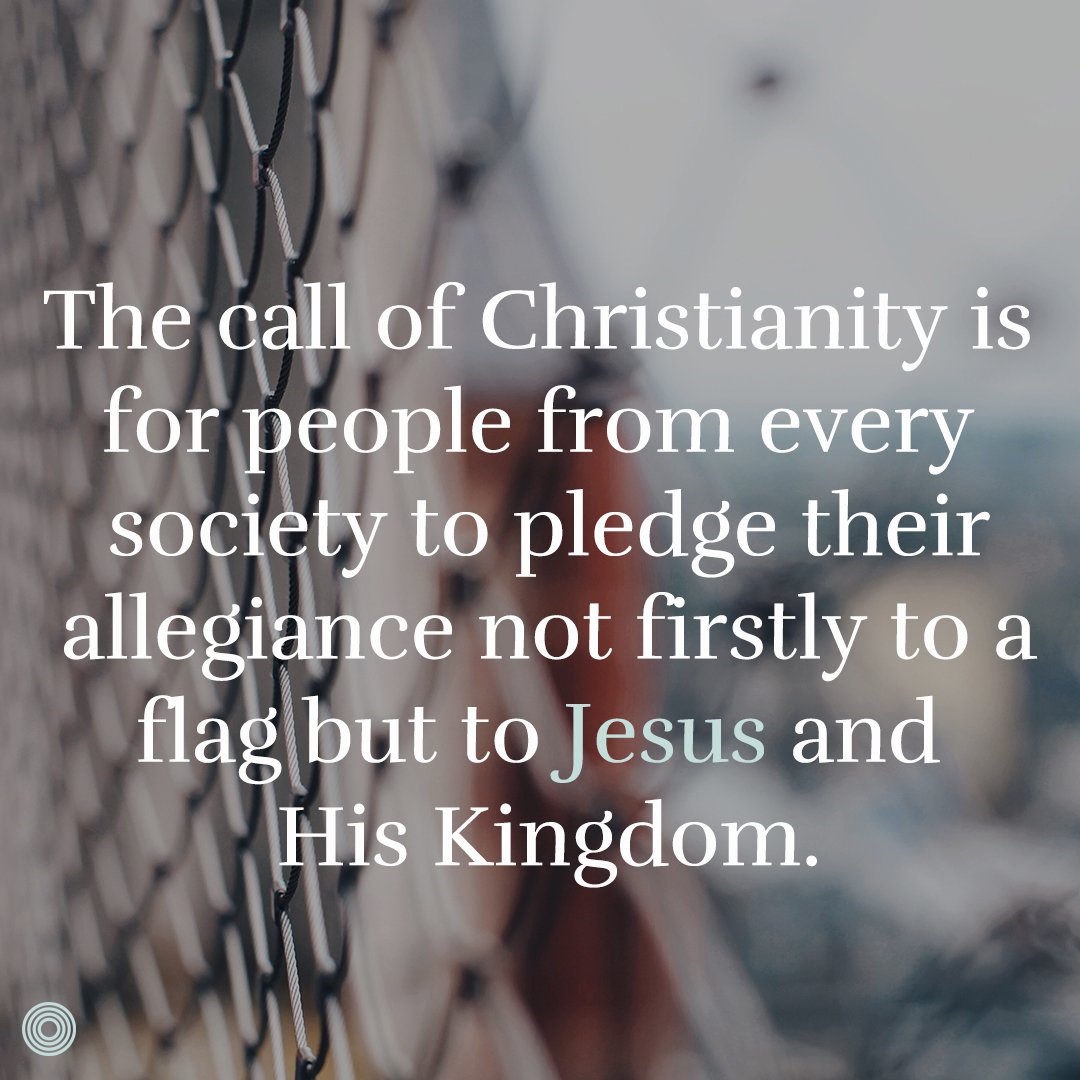 Up until this point, you and I have been passive spectators watching the Story unfold on the stage. But in Act V, Jesus has invited you to get up from your seat and step onto the stage. Empowered by the Spirit, the church has been sent by Jesus into the world to declare and demonstrate the good news that Jesus is King! The call of Christianity is for people from every society to pledge their allegiance not firstly to a flag but to Jesus and His Kingdom. Citizenship in Jesus’ kingdom trumps any other citizenship and fuels us to live as better citizens of any country seeking the flourishing of all.

No matter where we stand in political affiliation, the command to love our neighbors still stands.  We have to do the hard, slow, present work of figuring out what that means for us as a church to love both our foreign and domestic neighbors.  We can no longer be comfortable with keeping these issues at arm’s length, but must intentionally love our neighbors both foreign and domestic as “humans” not “problems” or “situations.”

We know this work is not easy.  We know this does not press us to hastily remove due processes, or eliminate rule of law but neither does is cause us to recoil with fear as we consider the plight of our neighbors. Here are a few of the ways we are thinking through our responses in these tumultuous times.

The final resolution of the Story is of a beautiful city where people of the Kingdom from every tribe, tongue, and nation live in harmony with one another and their King (Revelation 5:9-10; 7:9-10; 21:1-8).

If this is the end of our Story, the church has been called to give a foretaste of this future, now.  As we stated in the beginning of this post, our intent is not to divide but to unify us as churches around the biblical story that we have been invited into.  We are aware that different individuals in our congregations may come to different conclusions as they consider what faithfulness to God looks like. We are also committed, as elders of this church, to praying that our congregation lives into the unity provided in the gospel even as we love our neighbors in diverse ways. May the Missio Family be a people who faithfully embody this Story and see our tables, our lives, and Jesus’ Church as places where the immigrant, asylum seeker, and the refugee belong.

How might your community be a foretaste of this future, now?