Reframing Where We Are - Saturate
ChurchDiscipleshipGospelLeadership

Reframing Where We Are 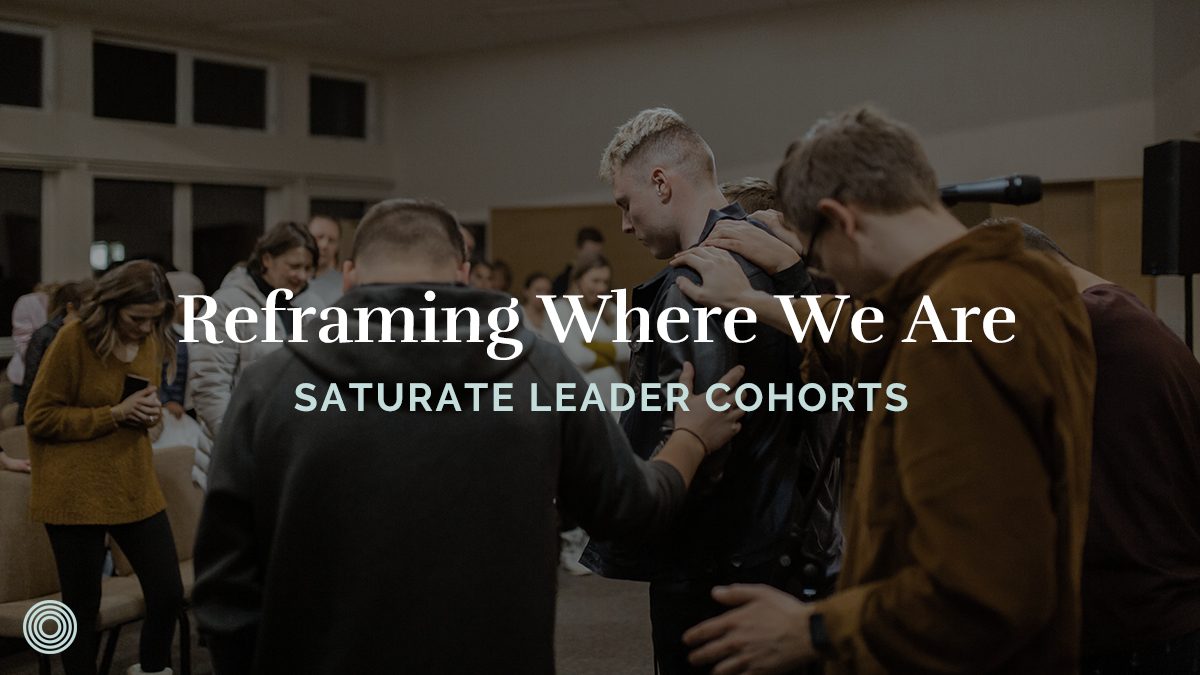 This blog is an excerpt from our recently released Leader Cohort Series.

We designed this series of videos and guides to help groups of pastors and leaders to meet together in cohorts for the purpose of growing in health, learning how to apply the gospel to their own life, and building strategies and structures for how they can lead their church more effectively in being disciples who make disciples towards gospel saturation.

Most of us have to wear multiple hats—son, brother, neighbor, employee, Christian.  Perhaps a good definition of maturity is when all our spheres and roles fuse, and we continue to remain our true selves in every area of our lives. But even our true self has varying ways of expression to suit each unique relationship.

For example, your father is in a terrible car accident; how you talk to your brother (we’re experiencing this together), your mother (comforting her), or your neighbor (explaining what’s been going on) will differ significantly.

Let’s take an example of someone who had his ministry redefined for him—Ezekiel.

Ezekiel had been trained throughout his formative years to be a priest. About the time he would have entered formal training, he was deported to Babylon and placed in a resettlement center with fellow refugees. It would have been understandable for Ezekiel and the religious leaders of his day to think that God’s redemption project through Israel had been put on hold. Yet, within this Babylonian resettlement, God visits Ezekiel with visions and commissions him to be a prophet. God instructs him with what he is to say and how he is to say it.

Though Ezekiel’s experience was disturbing, he had no doubt told himself that his “calling” as priest was over before it began. He probably had a crisis of both identity and purpose of life. God graciously speaks to him through a vision, showing him that he nor Israel are alone. In this vision, God leaves the Temple in Jerusalem while carried by beings whose features resemble Babylonian deities. Could it be that God was not confined to Jerusalem (a place) or the Temple (a delivery system)? Could the God who tabernacled among Israel in the wilderness tabernacle among them in Babylon? Could a priest be used by God to bring a prophetic word to His people?

Similarly, during our current COVID exile, it’s tempting to think that because we’ve lost our place and delivery system, church is on hold. But John tells us that Jesus tabernacled among us (Jn. 1:14).

It is wise to take stock of where we are and what we think God might be saying or doing.

Pre-COVID: I am a teaching pastor. We have a great church—worship, community, growth, and mission.

COVID: I am a teaching pastor without a pulpit and an aimless team—worship pastor who’s become all things social media, a children’s pastor cranking out media helps for parents, and a youth pastor who connects online.

Do we figure out how to continue on in our pre-COVID roles?  Do we adjust to the new workload?  Do we seek God for how to speak to and lead our community?

Jeremiah had prophesied that the Babylonian exile would last for seventy years (Jer. 25:11). This was God’s judgement upon the people of Israel—it was more than that. During the exile, God was going to refine His people in the crucible of suffering. His purpose was to create in them a new heart, so that He could bring them back to their own land to serve Him as they ought (Jer. 24:5–7). Ezekiel was raised up by God to minister to the people during the Babylonian exile.

Ezekiel, whose name means ‘God strengthens,’ was a priest who had been taken into exile with the rest of Judah. It was in Babylon that he was set apart by God to be a prophet (Ezek. 2:5). His whole ministry was in Babylon to a people under judgement and his message was of more judgement to come, but also of restoration and blessing from God.

To quote Sproul and Wolgemuth … “God’s ultimate punishment is not when he disciplines, but when he walks away. His final act of reproof is when he allows his children to live unfettered and undisciplined lives without his chastening.”

How would you have felt if you were Ezekiel … captive, no priesthood, no temple, no way to practice faith, to a people under discipline for 70 years?

Thinking about the voices your community needs to hear, we’ll consider Ephesians 4:11-14.

And he gave the apostles, the prophets, the evangelists, the shepherds and teachers, to equip the saints for the work of ministry, for building up the body of Christ, until we all attain to the unity of the faith and of the knowledge of the Son of God, to mature manhood, to the measure of the stature of the fullness of Christ, so that we may no longer be children, tossed to and fro by the waves and carried about by every wind of doctrine, by human cunning, by craftiness in deceitful schemes.

In this video, Jeff gives a working definition for each gift. Here is a practice to try. Ask yourself, “How is your team doing?” Based on the 5 APEST people gifts, what is it that your people need right now?

Feeling like all ministry fronts have been taken from them? – Apostle.

This doesn’t mean you need to find the four leaders you are not. Remember the opening example of your father in a terrible car accident?  We talked about differing voices depending on your role in the person’s life. It is that way for the pastor as well.  We don’t just share the hats—we wear the hats.

Take some time to think about:

Bill Clem leads the Center for Pastoral Flourishing at Western Seminary in Portland, Oregon. Bill has spent over forty years in various ministry contexts leading college ministries, planting churches, teaching at the undergraduate and graduate levels, and leading professional development seminars. Most recently, he served as the associate pastor of Imago Dei Community Church (Portland, OR) for almost six years.