Pastor, Let Your Plans Get Interrupted 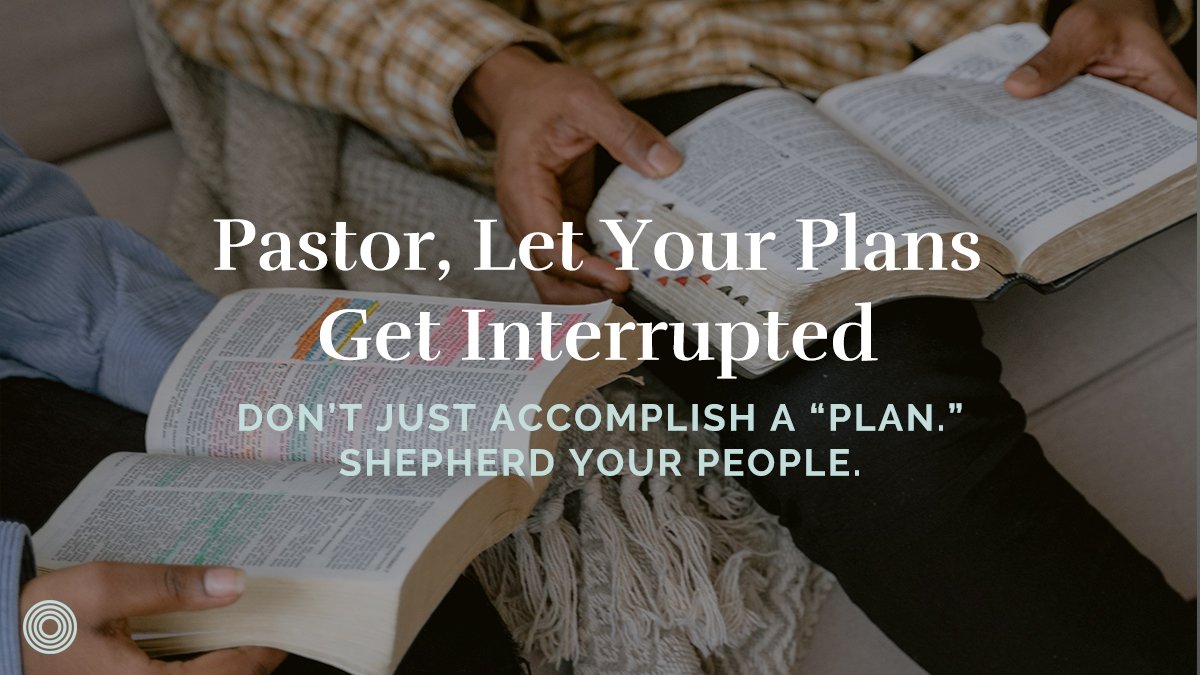 When Plans Get Interrupted

I am bi-vocational. That means I regularly wish I had more time to devote to all that I need to do (and want to do). My first year as bi-vocational pastor of my church was a difficult one. Around 6 months in, I received some critiques around how I should be doing more. There were many areas of brokenness in the structures and rhythms of the church and people wondered when I would help “fix” these things. When was I going to work on an elder development process? When was I going to get membership off the ground? When were we going to start up community groups again? All of these were important, and I had a plan for how to tackle them with the elders, but things weren’t moving fast enough for some (and too fast for others). As elders, we talked many times about the plan and were ready to move forward.

However… I got word from a lady in our church that her mom had just passed away and she asked me to help with the funeral. The following week, a guy I had been discipling was kicked out of his apartment and lost his job the same week. We rallied together to find him an apartment and a job. The next week, another person met with me and told me how they wished things were getting done faster. I remember feeling a sense of frustration. “God, how can I accomplish these important things in the church if my plans keep getting interrupted?” As soon as I thought those words, I knew they were not right. I had been trusting in my own wisdom and timing. It was my heart that needed to change.

Plans are important but they are not the goal.

Our church had been working through 1 Samuel and we got to the place where David was on the run from Saul. The week before I labored in showing how desperate David must have felt. He was God’s anointed king that served Saul faithfully and yet Saul was pursuing him endlessly. David was on the run for his life, never knowing if that day would be his last. But then I got to 1 Samuel 22. David, fearing for his life, ends up hiding in a damp, dark cave in Adullam (22:1). And then something interesting happens. It says in verse 2, “Everyone who was in distress, and everyone who was in debt, and everyone who was bitter in soul, gathered to him. And he became commander over them.”

When I read that, I was shocked. We see the godly character of David on full display. Even though David’s life was in danger, he was never too busy to stop and be a safe place for hurting people. Later in the chapter, Abiathar (the son of Ahimelech, who was murdered by Saul) comes to David and tells him what happened to his dad. David says to him, “Stay with me; don’t be afraid… With me you shall be in safekeeping” (22:23). Plans are important but they are not the goal. It is good to have plans, but it is also good to let your plans get interrupted for the sake of ministering to hurting people. Sometimes we get so focused on what we must do that we forget who we are supposed to be. And, as pastors, we are to display the very heart of God for our people. We need to be a safe place when our people are hurting, and we need to equip others to do the same. 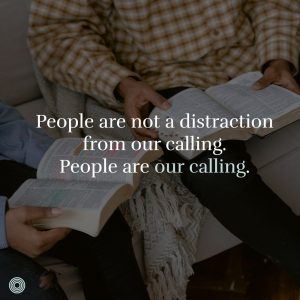 We like plans. Plans are good. We need to be intentional about how we will accomplish our goals and be effective. But sometimes we get so wrapped up in our own vision that people can feel more like a distraction or hindrance, and this is the wrong perspective. People are not a distraction from our calling. People are our calling. Any biblical study of the commands and qualifications given to pastors will show that, although there are clear tasks (such as teaching the Word), the focus is on character (1 Tim. 3; Titus 2; 1 Pet. 5). I think Peter expresses it well: So I exhort the elders … shepherd the flock of God that is among you, exercising oversight, not under compulsion, but willingly, as God would have you; not for shameful gain, but eagerly; not domineering over those in your charge, but being examples to the flock (1 Peter 5:1-3).

Note that Peter says nothing about having a theological vision, six-step growth plan, philosophy of ministry, or model for contextualized mission. All of these are good and helpful but they are not the goal. Displaying Christ to your people is the goal. Pastor, shepherd the flock of God among you and equip others to do the same. If I could be so bold as to rephrase Peter’s statement: I plead with you, Pastor… shepherd your people (which are God’s people). Do so by watching over them and leading them, not because you have to but because you want to. That’s what God wants. And don’t do it so that you get recognition or respect or benefits. Be excited to lead your people! And don’t lead them aggressively or abusively. Display the character of Christ so that they can see Him and follow Him too.

Ministry happens when plans get interrupted.

I truly believe that God is glorified when we are willing to be “less effective” in order to be more available to minister to our people. Sometimes God will cause things to happen which require us to pivot and change our plans (or our timeline) but this is a good thing. His timing is better than ours. His plans are better than ours. When people need you to shepherd them and that takes you away from “getting things done,” that is where ministry displays the character and beauty of Christ, who was willing to stop and care for hurting people, often when he was on the way to something else. See interruptions as glorious opportunities to trust in God and display who He is to others.

One such interruption was a guy named Frankie that had lost his job, lost his apartment, and was estranged from his two young sons. He was struggling big time. I got connected with him through a mutual friend. I dropped everything and met with him. I picked him up, took him to get some food and clothes, and helped him find an apartment. A week later we had a Men’s Retreat that I brought him to, and he started to open up. Now, he is an integrated part of the church family, growing in community, and growing in his relationship with Jesus. A little while ago, I was meeting with him and he told me:

“You know… If you had asked me three months ago if I would be where I am now in my relationship with God, I would have laughed at you. I felt betrayed and deserted from everyone, including God. But God has been showing me through this church that I’m not an afterthought. He really does love me and what he wants for me is better than what I wanted for myself. In coming to this church, I have seen the love of Jesus and I love him so much more now than I did before.”

Micah Lang pastors Redemption Hill Community in Lewiston, ME and is passionate to see healthy gospel-centered churches flourish in the New England area. He is married to Felicia and is "papa" to a daughter, Ada and a son, Judah. He regularly writes at his blog, Gospel Matters (gospelmattersblog.com), which explores how the gospel connects with all of life and ministry.