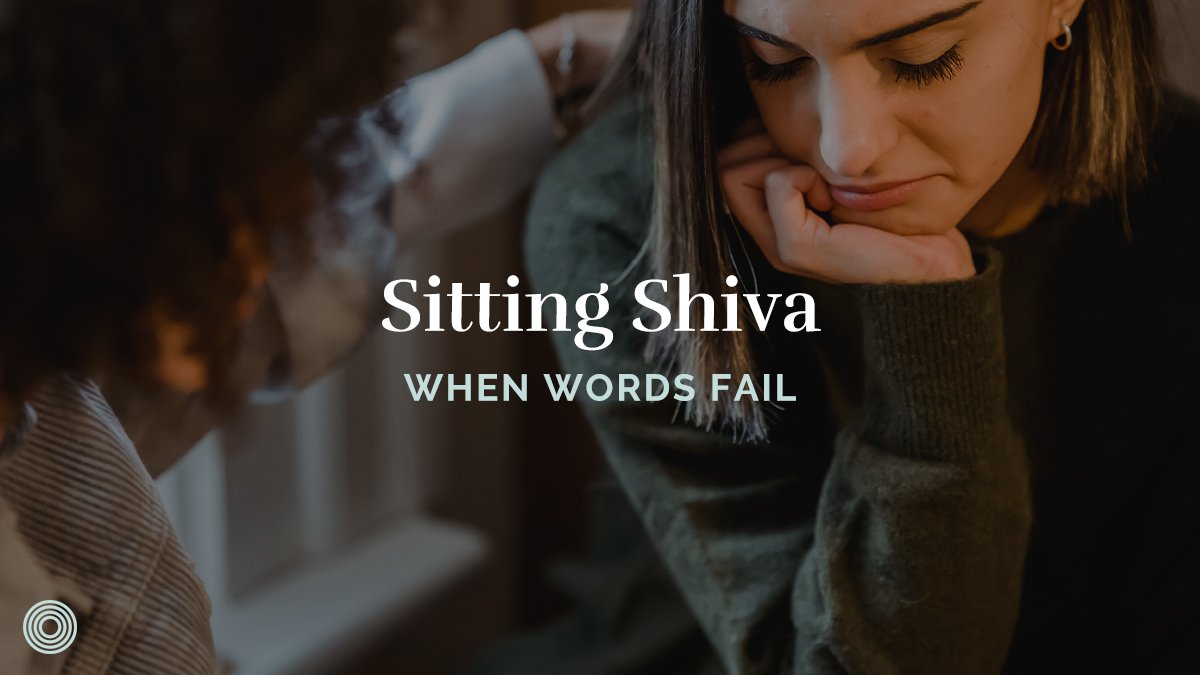 It’s been a little over a year since we lost our beloved daughter Erin to cancer. My wife and I will never get over it nor do we want to get over it.

For some reason, this decision seems to trouble many of our Christian friends. They want us to stop dwelling on it. To count our blessings. To move on. (We want to answer, “To what?” but fear that will just lead to more “advice”.)

It’s become clear to me that these well-intentioned brothers and sisters have never been taught how to respond to another’s grief. They do not know how to be present with someone who is suffering because they have literally no idea what the grieving person needs.

They do not know how to sit shiva.

Shiva is a Hebrew word meaning “seven” and traditionally refers to a seven-day period of formalized mourning by the immediate family of the deceased. Shiva begins immediately after the burial and concludes a short time after the morning service (Shacharit) on the seventh day. The practice finds its roots in the book of Job (see also Genesis 7:10 and 50:10). Therein the three friends of Job fulfill the protocol of shiva by sitting silently with Job in his grief and anguish:

Now when Job’s three friends heard of all this evil that had come upon him, they came each from his own place, Eli′phaz the Te′manite, Bildad the Shuhite, and Zophar the Na′amathite. They made an appointment together to come to condole with him and comfort him. And when they saw him from afar, they did not recognize him; and they raised their voices and wept; and they rent their robes and sprinkled dust upon their heads toward heaven. And they sat with him on the ground seven days and seven nights, and no one spoke a word to him, for they saw that his suffering was very great. (Job 2:11-13)

The three friends seem, at first, to understand how to sit shiva. They sit in silence for the required seven days. Apparently, the silence becomes too much for them to bear. They decide that what Job really needs is their opinions about why this suffering has come upon him.

They began to analyze Job’s predicament and offer their take on what caused his suffering. They question. They criticize. They try to convince him that he has sinned. That he lacks faith. Ultimately, their “friendsplaining” leads to their condemnation of Job.

Eliphaz in Job 22:5 – “Is not your evil abundant? There is no end to your iniquities.”

Bildad in Job 18:5 – “Indeed, the light of the wicked is put out, and the flame of his fire does not shine.”

Zophar in Job 11:20 – “But the eyes of the wicked will fail; all way of escape will be lost to them, and their hope is to breathe their last.”

When God shows up, He is none too pleased with the three guys: “My anger burns against you…for you have not spoken what is right” (Job 42:7).

It was not simply that the three friends said the wrong things. They believed that they could “solve” Job’s grief with explanations. I get it. You want to do something. To sit silently with someone in deep grief is extremely difficult. It is painful. No wonder why we try to extricate ourselves with words. To distance ourselves from the pain with explanations. Sometimes we attempt to avoid the other’s pain completely and choose to drop off a tuna casserole.

As I do not have the space here to unpack all the significant elements of sitting shiva I discuss in my pollywog of a manuscript, I will focus on just one.

Okay, that sounded harsh. Let’s use, “Be silent.”

“Anyone who responds to pain merely with activity, to suffering simply with offers of help, and to grief with attempts at distraction, knows nothing about this solidarity in the depths. He is only trying to compensate for the suffering, and his readiness to help merely increases the loneliness for the victim.” (Jurgen Moltmann)

Sitting shiva can and should mean more than simply establishing a protocol for visiting a grieving family. For we Christians, sitting shiva should be a lifestyle template that has us showing up and being present with those who are in pain or struggling with sadness. It is in those moments that we may best represent Christ in our communities. 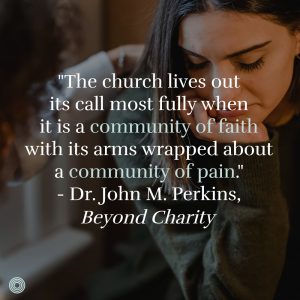 “The church lives out its call most fully when it is a community of faith with its arms wrapped about a community of pain.” (Dr. John M. Perkins in Beyond Charity)

“I will sit with you” creates hope for tomorrow: You are not facing tomorrow alone.

“When we honestly ask ourselves which persons in our lives mean the most to us, we often find that it is those who, instead of giving much advice, solutions, or cures, have chosen rather to share our pain and touch our wounds with a gentle and tender hand. The friend who can be silent with us in a moment of despair or confusion, who can stay with us in an hour of grief and bereavement, who can tolerate not-knowing, not-curing, not-healing, and face with us the reality of our powerlessness, that is the friend who cares.”  (Henri Nouwen)

Job’s friends got it wrong. They did not trust in the power of silent presence.

Fortunately, Winnie the Pooh’s good friend Piglet got it right.

There was a pause.

“Do you want to talk about it?” asked Piglet.

“That’s okay,” said Piglet, and he came and sat beside his friend.

“What are you doing?” asked Pooh.

“Nothing, really,” said Piglet. “Only, I know what Difficult Days are like. I quite often don’t feel like talking about it on my Difficult Days either.

“But goodness,” continued Piglet, “Difficult Days are so much easier when you know you’ve got someone there for you. And I’ll always be here for you, Pooh.”

And as Pooh sat there, working through in his head his Difficult Day, while the solid, reliable Piglet sat next to him quietly, swinging his little legs…he thought that his best friend had never been more right. (Winnie the Pooh by A.A. Milne)

Steve is retired and lives with his wife, Dawn, in Gilroy, CA. Steve worked for decades with Christian nonprofit ministries and helped found a Christian high school for at-risk kids.