Relational Challenges in the Family of God - Saturate
DiscipleshipFoundationsGospelLeadershipSpiritual Growth

Relational Challenges in the Family of God 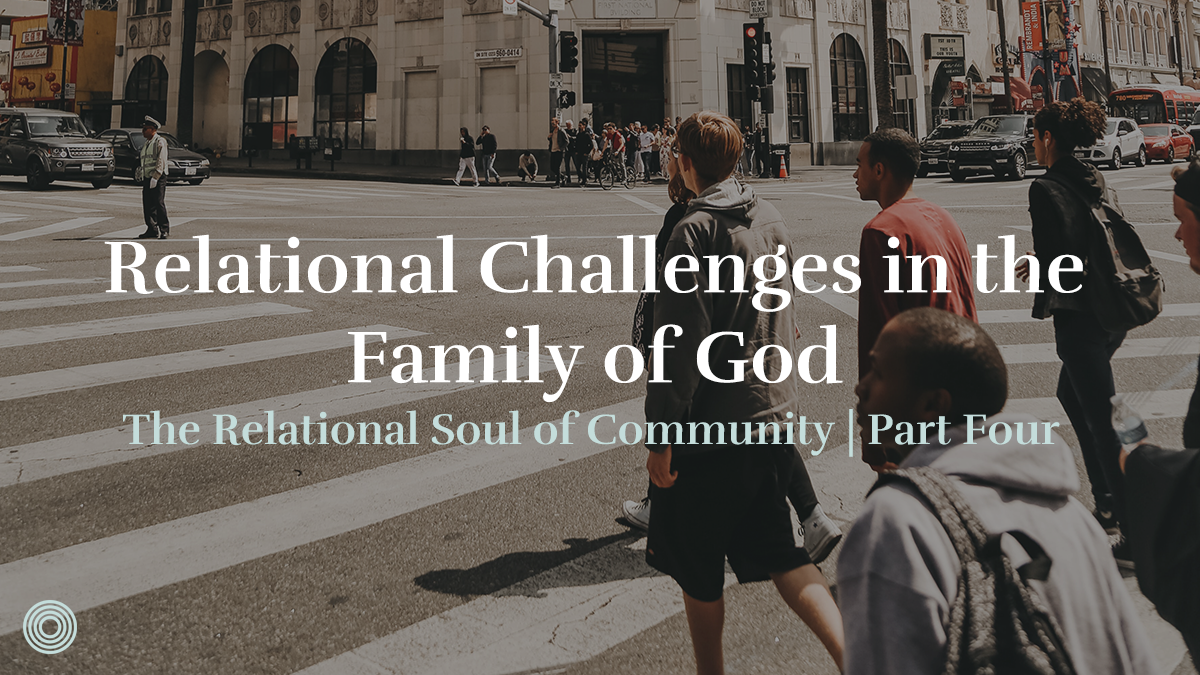 This post is the fourth post in a series based on a conversation with Rich Plass on the Saturate Podcast. You can listen to the episode here.

Brad Watson: I think what you’ve described is some of the beauty of structuring our churches around missional communities because it removes some of what we’ve settled for in American Christianity around not doing the relational stuff. Let’s just do a Bible study and then we don’t have to step into that matrix as you said. But there’s a lot of challenges with that too.

Rich Plass: That kind of approach to the soul makes us less present to ourselves and to others because when we just engage in thinking and studying, if you will, we engage left brain. Really, God wants us to be integrative persons and also rely on our right brain, which is our ability to sense and to be present to and to see holistically what’s happening relationally.

So those relationships in which we’re telling our story to one another is moving us out of that heavy left-brained stuff into a more holistic way of functioning neurologically and also psychologically.

Brad Watson: Yes, which is exciting. You know, one of the things my wife and I have experienced in missional communities is that it’s not just caring for people in difficult circumstances like a single mother that doesn’t have the finances, or a refugee family that doesn’t speak English. Those are challenges. Most of the mess is actually relationally immature people. Something we observed in a church where the focus is on knowledge and the relational piece is turned off, if you’re a leader, people consume your talents or your skills. People will say things like, “I like Brad. He’s good at preaching, and I like his personality.” But then when you lead a decentralized kind of community-based church, people aren’t consuming your skills or talents, they’re consuming you. To go back to what you talked about earlier, if you’re a healthy person, people are going to be attracted to having a relationship with you. So I wonder what wisdom do you have for that.

Rich Plass: Well, when approaching relationships, we keep in mind a number of things. One of them that I want to keep in mind is capacity. What is this person’s capacity? And their story will tell me a lot of that because one of the things when we start talking about relationships and start talking about the New Testament and our understanding of community is that I think we can end up with idolized notions.

I believe a lot of what Paul was pointing to was an eschatological reality of community. This is the ideal that God has called us to. He’s called us to this reality. But you only have to read 1 and 2 Corinthians to get a real dose of moving beyond idealism to reality. That’s more the tenor and the texture of the Church.

So we show up with persons that have limited capacities in many ways because of what they’ve lived in childhood in terms of their ability to do relationships well, and they’re deeply injured, and many times, certain aspects of psychological structures haven’t been developed well. They may not, for instance, be able to manage their emotional outbursts well or manage their impulses well. They may have very poor boundaries. They’re invited into a relationship of loving and they don’t think in terms of giving; they think in terms of their needing to receive being loved.

I think the challenge when we’re talking about community is we really need to make sure we’re growing and becoming healthy human beings. And again, there’s where I want to challenge leaders to be self-aware, to understand their own story, to understand their own limitations, to be realistic about their limitations because we’re not Jesus. We’re not God. We’re human beings and we have real limits.

And frankly, we can only hold so much emotionally. We need to be able to stay differentiated emotionally in relationship with others. We need to remember that when we’re in community, each person has to be responsible for their own maturation and growth. We can’t take that on and make their growth our fundamental responsibility. I’m here to care, to support, to nurture, to guide, but I’m not able to do their work for them.

Some people will be willing to do work. Other people, maybe for a time, but maybe not that seriously. There’s all sorts of varieties that we have, but I think we need to be realistic about what we’re expecting when we talk about community. And we need to be doing our own work, we need to make sure we’re healthy relationally, and we need to make sure we’re maintaining boundaries and staying emotionally differentiated, encouraging people to be responsible for their own souls.

Jared Pickney: Yeah, that’s money. Take responsibility for your own relational, emotional, spiritual health. I think there are a lot of people that spend so much energy trying to focus on the people on the fringes who are asking for them to force-feed them and as a result, they’re worn out. What I hear you saying is what I think so many of us need to hear over and over: if someone’s not willing to take responsibility for their own growth, you’re going to kill yourself trying to mature them.

Rich Plass: I think if we’re not careful, we could end up with a real cynical and even negative attitude towards persons, and that’s why I landed on this notion of think in terms of person’s capacity. What’s their capacity for relational connection? What’s their capacity to be intentional? Some persons are so deeply wounded it’s more difficult for them. They struggle with real weaknesses in terms of relational connectedness. And if we can be realistic about that, I think we are more inclined to stay in a gracious posture towards them, and also a truth-telling posture towards them without becoming either cynical, angry, frustrated, disgusted, or even avoidant. Jesus, of course, engaged these folks, but He engaged them by calling as we need to call them. Follow Jesus, and not take too much responsibility for others’ journey of faith.

People have to own that responsibility. And some will go to a far country, and unfortunately, some have the chronic habit of going to far countries. There again, we leave that to the Lord. The fruit is the Lord’s work. 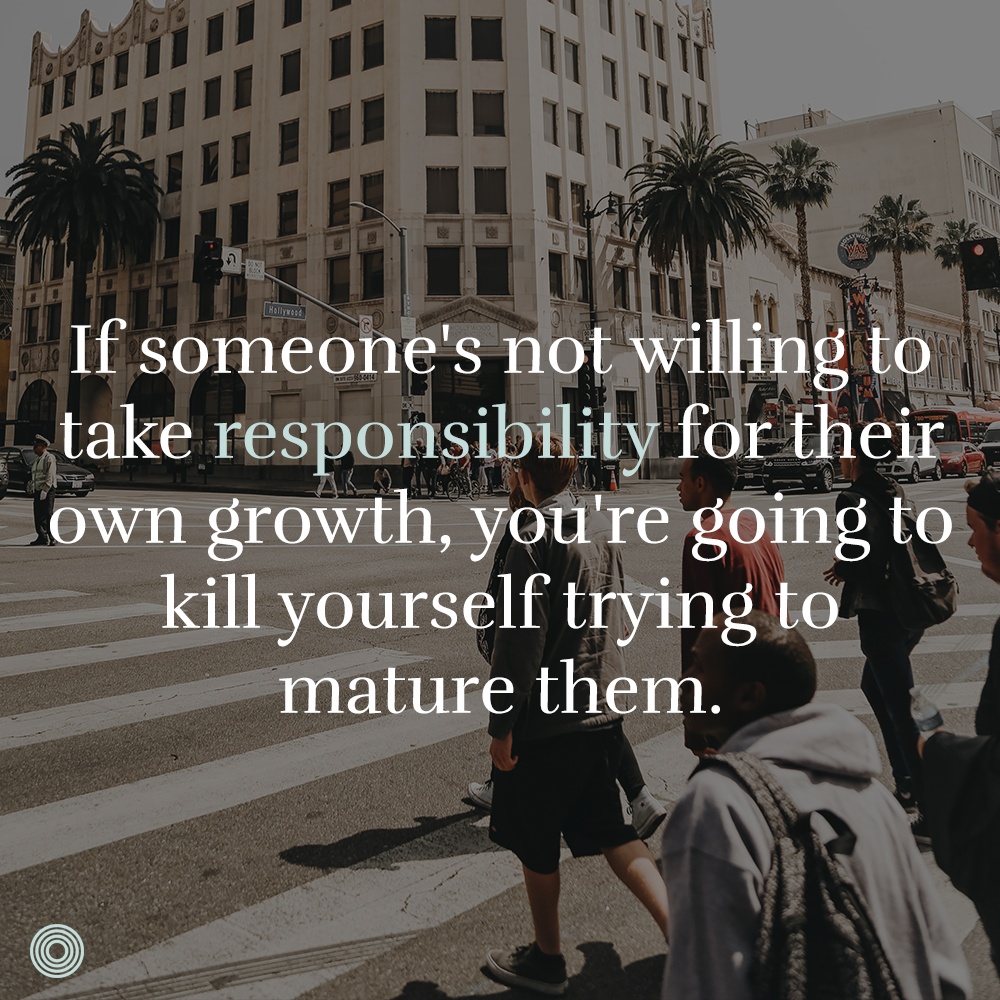 Brad Watson: I think that’s such a good thing for so many people to hear. I can remember the moment, the living room that I was in, and the plates that I was holding. I was cleaning up after a community gathering in our house and thinking, “I cannot be these people’s waiter any more. I just can’t do another step. I can give this person grief but not too strong. I can give that person laughter but not too over the top.” I was just trying to give everyone what they were needing, as if I was working at In-N-Out Burger or something. For me it was a very pivotal moment of pressing into the reality that you’ve been talking about.

That doesn’t mean we ignore ourselves. We pay attention to ourselves, but also we’re committed to be generous people in giving ourselves to others.

Brad Watson: The expectation of mutual responsibility, I think, is what you’re talking about there. I think far too often leaders in that setting take the posture of, “I will self-give. I will give of myself. I will pour myself out, but these people, they’re not ready for that yet, so they don’t have to clean up afterwards. They don’t need to meet the family standards, so to speak, or the family practices even. So I’ll do it for them. I’ll even care for their soul on their behalf and do the praying and do the communing and silence and solitude for them instead of them doing it themselves.”

Rich Plass: Yes, I think one of the things we talk about frequently with leaders in terms of staying healthy is in terms of availability. Jesus wasn’t available 24/7. It’s clear from the Gospels, after He fed the multitude, He went off to be alone. He wasn’t available to the disciples all the time. They wondered where He was on occasion because He was off alone by Himself, sometimes with only several of the disciples.

So we know that Jesus was measured in His availability, if you will. And I think sometimes we need to be mindful of that too, that a leader of a community group or a pastor can’t be available 24/7. If he is, he’s going to end up with real relational difficulties both within himself and in his primary relationships because it’s not possible to have healthy relationships if we are always available to others outside of our primary relationships.

Brad Watson: When you say it like that, it’s clearly unhealthy, and yet there’s something within leaders that drive them to do that.

–> Take a look at the resources we’ve curated to help you as a disciple-making leader in this unique moment.